WE ARE ALL FROM SOMEWHERE ELSE 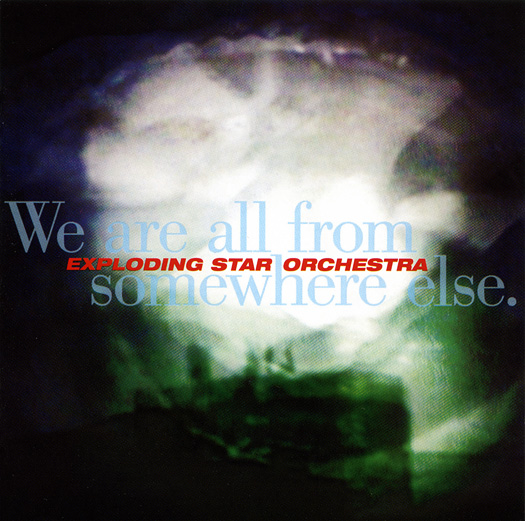 In 2005, cornetist Rob Mazurek was approached by The Chicago Cultural Center and the Jazz Institute to put together a group that would represent the more contemporary / avant-garde side of sound in Chicago for a concert in Millennium Park’s Frank Gehry-designed concert hall. The music was conceptualized/composed in Manaus Brazil, Fontevraud, France and Chicago, and developed over more than a dozen performances of the Orchestra before it was recorded by John McEntire at his Soma Studio in Chicago.  We Are All From Somewhere Else is comprised of 3 distinct sections, and corresponds to a story involving an exploding star, cosmic transformation, a sting ray, the travels of the sting ray, intelligent conversations with electric eels, the destructive power of humans, the death and ascension of sting ray, the transformation of sting ray ghost to flying bird, and the transformation of bird to phoenix to rocket to flying burning matter to a new-born star.

Says Mazurek, “I could clearly see and hear the events as a kind of animated adult/children’s story that could be presented in book or video form. In the end you have a poem text based on the original story line that is then flipped backwards to reveal another perspective on the poem. The flipped text was orchestrated by Portuguese video artist and conceptualist Joao Simoes, while I was in Lisbon making final preparations for the release of this recording.”  As the arrangements of the parts of the pieces came together it became more and more evident that Nicole Mitchell’s flutes would play a major role in the realization of the music. That said the intent of the music is not to featuring individual players (although this very well could have featured any individual in the group, as they are all very strong soloists and improvisers) it is more about the projection of a certain sound pertaining to imagination and the trajectory of the sound as movement in time and space, weaving patterns and non-patterns around and inside the idea of the poem. The overall organic approach included actual organic sounds – for example, the sounds of electric eels recorded by Mazurek at INPA research laboratory in Manaus. The juxtaposition of two drums, two basses, two mallets, multiple flutes, two cornets, bass clarinet, ARP synthesizer, guitar, trombone, voices and flugelhorn all played important roles in the development of the final sound.

“Psycho-Tropic Electric Eel Dream” is a group improvisation centered around the sound of electric eels. The electric eel tanks Mazurek recorded at INPA contain two species of eels, Pulsating and Waveform. The sound was recorded in a special tank of 15-20 eels of various sub-species, each with its own tone. The results are fascinating tonal clusters not unlike the sound of violins. This track reveals the beauty of these fine creatures and juxtaposes our improvisation with them, and concludes with spoken word by Rob Mazurek (“Robert Ashley was in my head during this part”), some ARP by Jim Baker and some final cascades of Nicole’s flute, which was snuck into the recording on the bass amp mic sitting in the hallway while Nicole was playing in another room. “Black Sun” features Jim Baker’s lovely piano playing. “This piece was originally written for the great French pianist Jeanne-Pierre Armengaud,” says Mazurek, “who I had the pleasure of working with at Abbaye Royale de Fontevraud in France during my residency there.” What you hear is Jim’s emotionally charged and understated improvisation on the theme of the composition. The sound corresponds perfectly to the text/poem of the recording in which the death of the stingray is a new re-birth of the bird and eventually a new star.  “Cosmic Tomes” starts out with storm sounds from the Amazon reversed. The powerful first section reveals a wide-open improvisation on a specific theme and then deconstructed through 3 harmonic centers. The Cornet is that of composer and leader Mazurek. Corey Wilkes’ poignant flugelhorn plays an important role within the center of the piece and for a moment he takes off in a more grand gesture.

The song then melts into the second part of this suite; repeated lines based on the last harmonic chord of the first section find the bass taking the lead and Matt Bauder’s two tenor parts and bass clarinet part playing a major role. One hears Jeff Parker’s guitar, Jeb Bishop`s trombone, Josh Berman`s cornet, Matt Lux`s electric bass, Jim Baker`s modified piano, Nicole Mitchell`s flute, and some excellent cutting, filtering post-production work by John McEntire. Part 3 of “Cosmic Tomes” is meant as a kind of prayer or meditation on the idea of unity in the world/universe.

“15 Ways of Looking at a Finite Universe” is a quick piece inspired by the Anna Levine book “How the Universe got its Spots”, and catapults the recording into the last piece, “part 5,” In which we travel back to space, birthing or re-birthing new galaxies. Nicole Mitchell’s flute floats over the thick harmonics with Matt Bauder`s bass clarinet doubling the bass of Matt Lux and Jason Ajemian, creating the foundation for the sweet melodic interplay.

THE EXPLODING STAR ORCHESTRA IS

All compositions, arrangements, text and concepts are by Rob Mazurek unless otherwise noted.