Everybody Was In The French Resistance

Fixin’ The Charts, Volume One 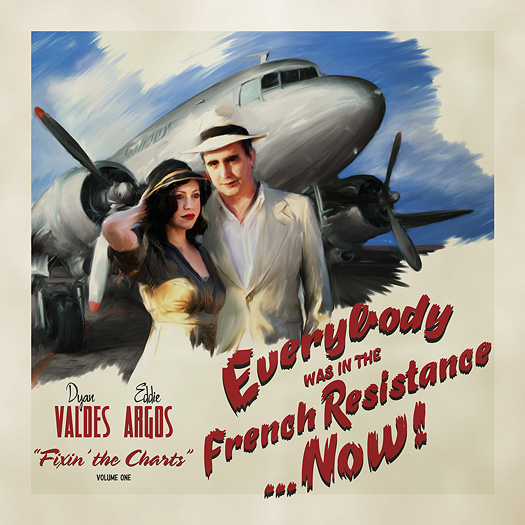 Everybody Was In The French Resistance … Now! aka Eddie Argos from Art Brut and Dyan Valdés from The Blood Arm have announced they will be releasing a digital one track single, G.I.R.L.F.R.E.N. (You Know I’ve Got A), on Monday 18th January ahead of the release of their debut album, Fixin’ The Charts, Volume One. The iTunes version of the single also features a bonus track, I Wanna Be Your Boyfriend. The album, released on 25th January, sees the band correcting the mistakes of pop songs past, and G.I.R.L.F.R.E.N. (You Know I Got A) is their response to ‘Girlfriend’ by Avril Lavigne.

EWITF … Now! formed when Eddie and Dyan (also a couple) were on a car journey home from San Francisco to Los Angeles. ‘Jimmy Mack’ by Martha Reeves and the Vandellas was playing on the radio – Eddie has always had a problem with this song, as it is cruel to sing a song to your boyfriend telling him you are planning to cheat on him – so Eddie told Dyan that someone needed to defend poor Jimmy Mack. Jimmy was probably off fighting in Vietnam (the song was released in 1967), and there she was singing about getting off with some other boy who « talks just as sweet ». Dyan agreed with Eddie’s disapproval of Martha’s infidelity, and they went home that night and wrote a response to the song from Jimmy’s perspective. Soon, they began to think of other pop songs with which they disagreed, and set about « fixing them ». Fixin’ The Charts Volume One, finds them defending the belittled blue collar worker from Kanye West’s ‘Gold Digger’, telling Gerry And The Pacemakers that it is in fact okay to walk alone, dumping the manipulative Martha Reeves on behalf of poor Jimmy Mack, and taking the misguided instructions of a 17th Century ballad to its logical conclusion. And unlike U2, EWITF … Now! DID record their album in Joshua Tree (rather than merely being photographed standing next to one!).