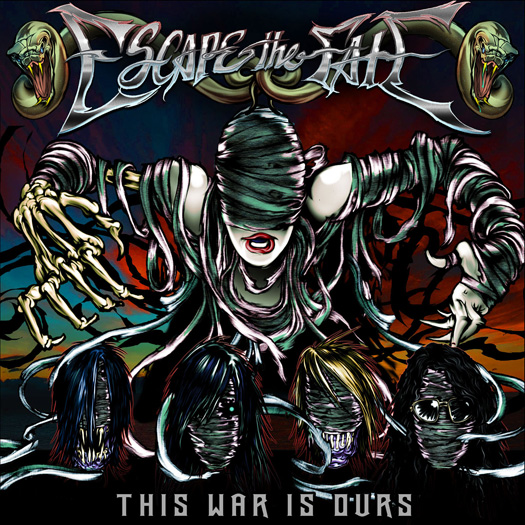 The barnstorming opening track on Escape The Fate’s hotly anticipated sophomore slab, This War Is Ours, sufficiently sums up the hard-partying and hard rocking Las Vegas band’s attitude, authentically informed by real-life drama. The song is called « We Won’t Back Down » and if ever there was a band who could make that claim, it’s this one.

Renewed, reinvigorated and newly energized by a new lead singer and a take-no-prisoners approach to songwriting, Escape The Fate have recaptured the hunger that generated their early buzz and have taken tremendous steps toward becoming a band with longevity, like their heroes in Motley Crue or Guns N Roses, crafting a sophomore-slump defying album that is alternately their heaviest and their most melodic and full of power, passion and depth.

The two years that have passed since the controversial band released their Epitaph debut, Dying is Your Latest Fashion, was a trainwreck that threatened to destroy all of the impressive things the young outfit had accomplished.

Explains Max Green: « Our guitar player walked out in the middle of a tour, our singer went to rehab twice, then he went to jail, he got probation. Later we couldn’t leave the United States, then we couldn’t leave Nevada. Our singer became a drug addict, our bass player — that’s me — became a drug addict. I got cleaned up, we kicked out our old singer, and a ray from heaven shined down on us with an amazing opportunity. »

That amazing opportunity? The sudden availability of virtuoso singer Craig Mabbit, who had recently parted ways with Blessthefall. « I found myself looking for a project or to start something up. I was going to join a band by the name of A Skylight Drive, » Mabbit recollects. « They gave me the number of somebody to get the recording of their new album so I could write to it. I wrote the wrong number down. Instead of calling the guy from the band, I called Escape The Fate’s manager. I was like, ‘Yo send me the tracks!’ and he was like, ‘What tracks?’ We had a laugh. »

Next thing he knew, Mabbit — who had befriended Escape The Fate during Vans Warped Tour and a subsequent Escape The Fate / Blessthefall tour — was on a plane to Las Vegas. « We discussed the idea [of my joining the band]. Both of our bands were on the rise and losing your frontman is a big deal. But we decided we play music for a reason, who cares what people think, let’s make the kind of music we want to make the way we want to make it. »

« [Playing music] is what Craig lives for, he’s got that fire, » Green beams. « He’s an amazing vocalist and he goes nuts on stage. He just pumps up the volume on everything basically, he just makes everything better. »

Adds Mabbit: « We thought our bands were done. We got so close to making it and breaking it, and then it all fell apart. We’re all very grateful and excited that we had the opportunity again and that we got hooked up with each other. »

That go-for-broke attitude caused Escape The Fate to rebuild their band around the best parts of the past together with some forward-leaning new elements. Becoming a four-piece caused all of the instrumentalists to step up their game, while Mabbit found himself outgrowing the « screamo » tag and embracing more of a full vocal range.

The band hit the studio with John Feldman (The Used, Atreyu, Good Charlotte) and made the kind of record Mabbit has been dreaming about since he was a kid looking up to his rock n’ roll heroes. « Harder Than You Know, » a bona fide larger-than-life spine-tingler of a ballad, is one of his favorites, while heavy breakdowns continue to inform tracks like « The Flood. » « Something » is built for the radio while « 10 Miles Wide » opens with a classic thrash metal attack and a shriek that would make Axl proud, backed by death-grunts and a rollicking beat that goes headfirst into an anthemic chorus sure to get fists pumping worldwide.

While they’ve attracted a number of fans from the Hot Topic crowd to worlds of Warped Tour and beyond, in their hearts, Escape The Fate is more of a tried and true rock n’ roll band than any sort of sub-genre tag. If you want to call them anything, call them exactly that: rock music.

After a year of drama and speculation following their original singer’s departure, Escape The Fate has emerged stronger than ever. With a brilliant new album and a fall tour with Chiodos and Silverstein on the calendar, the resilient quartet have proven that sometimes, fate is what you make of it.