KNIVES DON’T HAVE YOUR BACK 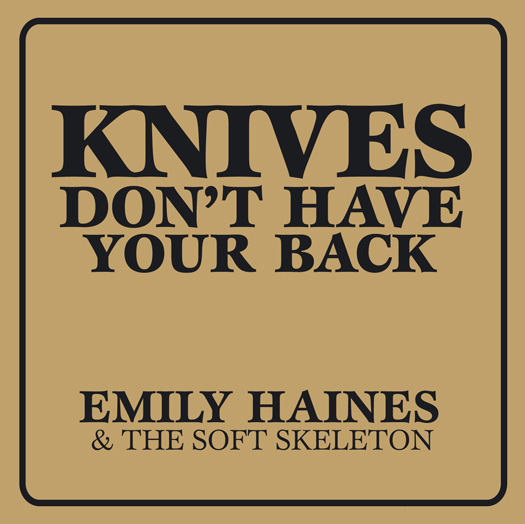 Emily Haines is an artist that defies labeling. Front woman for Metric and part time singer in the Broken Social Scene she is proud to release her debut solo album, Knives Don’t Have Your Back this late spring on Grönland Records. Written and recorded over the past four years in Los Angeles, Montreal, Toronto and New York, the record sites contributions from the likes of Scott Minor fromSparklehorse, Broken Social Scene’s Justin Peroff, Stars’ Evan Cranleyand Metric’s Jimmy Shaw. A distinct contrast from Metric’s bold, danceable sound, Knives is an intimate and subtle collection of mellow, piano-driven tunes complimented by soft string and horn arrangements.

« Knives is cinematic, with its ethereal piano lines and touches of strings and horns. Most impressive though is her voice, which is clean and full and breathy — it stands alone. »

Toronto based Metric has climbed the ladder the good old-fashioned way. Years of writing,

recording and performing have earned them their stripes as a bonafide success story. Their

magnificent journey has taken them around the world, collecting accolades and critical acclaim as

they went. The band held their own during a two night stint opening for The Rolling Stones at Madison Square Garden earlier this year, appearing on Late Night with Conan O’Brien on their day off in between. They performed at the prestigious Coachella festival and appeared at both Leeds and Reading. These experiences and successes are the bold, exuberant part of Emily Haines’ artistic persona. Her solo effort, Knives Don’t Have Your Back, and the intimate live performance she’s created, illustrate her more introspective, personal body of work.

Haines’ decision to release a solo album was long in the making. She says, “When I was a little

kid… I would creep downstairs to the piano and write rudimentary songs about imaginary places.I’m told the first song I ever wrote was a love song to a cranberry tree. I always used the mute pedal. I hated the idea of anybody hearing me. Everywhere I’ve lived while working with Metric,I’ve written songs on the piano and played them for no one. On the advice of a friend, I decided I’d better start recording them before they were forgotten. Four meandering years later I ended up with this collection of songs featuring a few of my favorite people, a group I call The Soft Skeleton.”