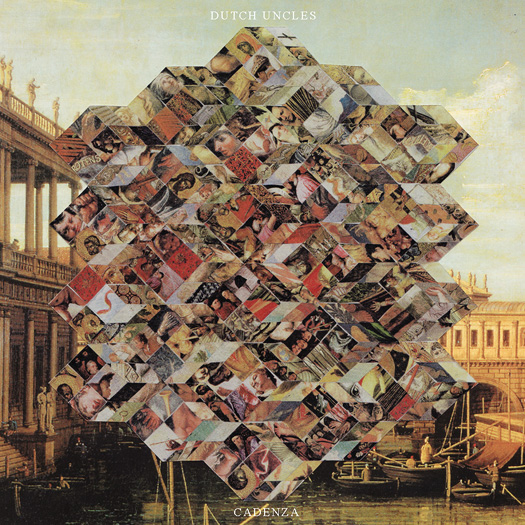 Sometimes it’s better to take the byroads. Walking the backstreets rather than the high street may mean a longer journey, but it’s where the character and quirks, the very heart of a town can be found.  And character, quirk and heart is certainly what Dutch Uncles acquired between forming 5 years ago in the Manchester ‘burb of Marple and finishing their debut album for Memphis Industries, Cadenza. It’s a record which, in addition to the cross-dressing videos and live shows in churches with 10-piece orchestras, puts clear blue water between them and the dreary Mancunian macho-rock clichés of the recent and not so recent past.

First let’s rewind a little. Comprising Duncan Wallis (vocals), Robin Richards (bass), Daniel Spedding (guitar), Peter Broadhead (guitar), and Andy Proudfoot (drums), Dutch Uncles met at primary school. Having played in various bands together, the then teenage Dutch Uncles found themselves, almost by accident, recording and releasing a self-titled album for a German label in 2009.   Adventures in Deutschland ensued, but the Dutch Uncles soon realised they needed to return back to Blighty in order to regroup.

The band recorded Cadenza last summer locked in a Salford basement experimenting and stretching their songs into new and unexpected shapes. Produced by Brendan Williams and Phil Bulleyment they’ve created an album that, whilst drawing on the eccentricities of Sparks, the piano methods of Steve Reich and the unhinged prog-pop of the Cardiacs, has at its heart a real pop pulse.

This is highbrow pop; unashamed of its pretension and ambition whilst staying fit to bust with hooks.  Take the title-track Cadenza; the infectious rhythmic Italo House piano opening and peculiarly catchy looping sea-shanty guitar riff give us the hooks, whilst Duncan’s vocals are exquisitely counterpoised, drawing from his experience of being a pallbearer at his Grandmother’s funeral in a surprisingly uplifting way.

Fragrant see the band’s pop nouse right to the fore. Precisely woven melodies and whip-smart guitar lines frame singer Duncan’s spidery lyricism, combing to forge a chrome plated future pop classic.  Then there’s Dressage, all frenzied guitars, full-throttle pace, and ping pong melodies. “We basically write to entertain our attention spans… an ADD-indie if you will” says Duncan.   But the album also shows off Dutch Uncles more reflective side.  Dolli is a lilting mostly accapella piece, and The Rub sees Duncan’s plaintive refrain framed by vibraphones, xylophone and glockenspiel. As Duncan says of the album “it’s definitely pop music but hopefully with a little bit more for the listener to scratch beneath the surface”.

Having taken the scenic route, Dutch Uncles have finally arrived at their destination, and you know what? It’s been well worth the wait.