Going Out In Style 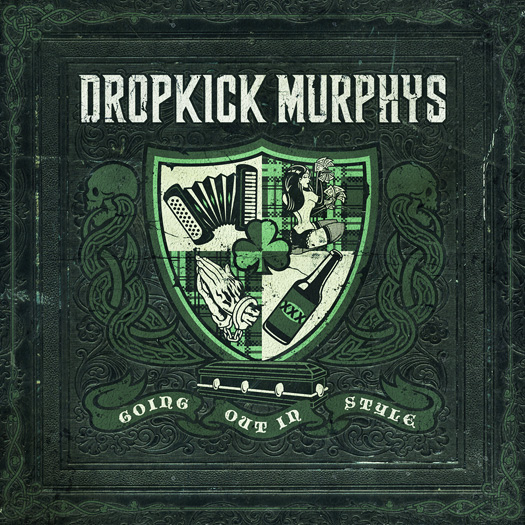 Dropkick Murphys will release their seventh full-length studio album, Going Out In Style, March 1, 2011 on their own Born & Bred Records (ILG). Produced by Ted Hutt, Going Out In Style features the group’s signature blend of punk rock energy, folk soul, Irish spirit and American rock ‘n roll on tracks like « Memorial Day » (streaming now at www.RollingStone.com), « Going Out In Style, » « The Hardest Mile, » « Cruel, » « Climbing A Chair To Bed, » and a rousing rendition of « Peg O’ My Heart » with guest vocals by Bruce Springsteen.

On Going Out In Style, Dropkick Murphys throw a 45 minute, 49 second party to end all parties, all the while reveling in the Irish tradition of telling tales of triumph, tragedy and celebration through music. The band revives the art of the album as a cohesive whole on this raucous and rollicking romp overflowing with punk rock energy, folk soul, and rebellious spirit. Dropkick Murphys deliver one anthem after another. « Hang ‘Em High » ignites the album with a gang chant into a unforgettable bagpipe laden riff, driving guitars and big drums. Nodding to AC/DC while infusing flourishes of Celtic soul, « Hang ‘Em High » is the ultimate battle cry. Then there’s « Take ‘Em Down, » which continues to display the band’s social consciousness and their unwavering support for organized labor. On songs such as « Broken Hymns » and « Cruel » the band explores new territory, incorporating a myriad of sounds and textures with arena-ready drum beats, diverse instrumentation and epic refrains.

Going Out In Style continues in the great storytelling tradition. Through song, story or play, the music often inspires the author–as in James Joyce’s final work Finnegan’s Wake, based on an 1850s music hall ballad of the same name–and sometimes the story inspires the song. These songs take the band’s own personal experiences and family folklore and roll them into the story of one fictional character, Cornelius Larkin. Fueled by fiery riffs and unforgettable choruses, Going Out In Style traces the journey of Larkin, whether it’s the Irish immigrant’s first person account of his own wake or the band’s in depth interpretation of his life and lineage throughout the album’s lyrics. Casey reveals, « Cornelius has passed on to the other side, and the album becomes a retrospective of his life. He’s one of those guys who immigrated to America at 16, got drafted into the Korean War, married young, had lots of kids, worked hard, and lived a full life rife with different characters, ups and downs, and trials and tribulations. Some of the stories are fictional, but most are odes to our grandparents, friends, and loved ones. »

The album’s title track gave birth to Cornelius. It’s a rousing celebratory anthem complete with guest vocals by NOFX’s Fat Mike, The Living End’s Chris Cheney and Rescue Me mainstay, actor/comedian Lenny Clarke. « Going Out In Style » roars with a gang-style refrain and simultaneously heartfelt and hilarious lyrics. « We all have this romantic idea that our death will be like an international day of mourning, but that’s not going to happen, » chuckles Barr. « The song has two sides. There’s a serious side recounting this Larkin’s life, and then there are all of these fun parts about various women and characters. »

For Going Out In Style, Dropkick Murphys even enlisted the vocal talents of the legendary Bruce Springsteen–whom they first met at a DKM gig in New York and later collaborated with onstage at one of Springsteen’s Boston shows. Springsteen swaps verses with Casey for a spirited take on the old standard « Peg O’ My Heart. » « It has a classic old fifties rock and roll feel, » says Casey. « Both of my grandmothers are named Peg. One grandmother, Peg Casey, is always saying, ‘When are you going to do that song? Your grandfather always sang it to me!’ The time signature changed, so hopefully they still appreciate it when they hear it. »

The collaboration is a perfect intergenerational bridge for fans and band alike. Dropkick Murphys have always strongly resonated with audiences young and old due to their working class ethos and cathartic sonic revelry. « It links two generations, » says Casey. « We’re spanning a lot of years of music here, yet our songs share similar themes, stories, and values. »

Another song that ties together the story of Cornelius and resonates with a larger audience is the powerful and poignant first single, « Memorial Day. » Barr says, « It’s a song that honors our grandparents’ generation as well as Cornelius himself. There was something amazing about that time. They struggled through all kinds of adversity, and it’s inspiring. »

The tale of Cornelius doesn’t end with Going Out In Style. In order to round the story out, the band called on their friend, best-selling author Michael Patrick MacDonald (All Souls, Easter Rising). MacDonald wrote an eloquent obituary for Cornelius Larkin in the album’s liner notes, along with the beginnings of a more extensive narrative about the album’s main character for listeners to delve into. MacDonald became immensely engrossed in the character’s development, particularly as Cornelius began to take on elements of MacDonald’s own family history. At that point, the story grew into a much longer saga that will be available on the band’s website in conjunction with the album release–and the story could evolve into a book sometime in 2011.

« Collaborating with the Dropkick Murphys is, for me, a family affair, » says MacDonald. « Cornelius Larkin represents all that we come from. And this story is about embracing the good, the bad, the ugly and beautiful that we all come from; ultimately learning to work with ALL of it. Past is truly prelude… »

Casey elaborates, « I wrote an outline which began leading to songs. At the same time, I wanted the obituary to have that author’s flair, a little more description, a more detailed narrative, and a deeper story. Michael listened to the songs we’d written, and he fleshed out the story and really put a name and a face on the character. It’s a new approach and a unique partnership, especially in this day and age. The songs inspire the story, and the story inspires the songs. It’s a deep record, and it celebrates a life. »

Going Out In Style signals the beginning of another chapter in Dropkick Murphys’ own story. Barr explains, « I hope fans can listen to Going Out In Style with the same excitement we have. It’s all about family and friends for us. No bullshit…we don’t like to convolute things. That translates to the music, and the fans appreciate it. It’s a beautiful thing, and I can’t wait to introduce Cornelius Larkin to the world. »

www.dropkickmurphys.com
About Dropkick Murphys
Known for their complex distillation of classic punk rock, Celtic folk and American rock ‘n roll, critically-acclaimed Dropkick Murphys have released 10 full-length CDs and sold over 3 million copies worldwide since hitting the scene in 1996. 2007’s The Meanest Of Times–released via the group’s own Born & Bred Records–marked the band’s highest Billboard Top 200 chart debut ever (#20) and is their fastest selling record to date with over 300,000 copies sold worldwide. The Meanest Of Times was #40 on Rolling Stone’s Top 50 Albums Of The Year and « The State Of Massachusetts » came in at #83 on their Top 100 Singles of the year. The group’s single « I’m Shipping Up To Boston »–from 2005’s The Warrior’s Code CD–has sold over 1.25 million copies. »I’m Shipping Up To Boston, » a song with lyrics penned by Woody Guthrie, gained mainstream notoriety after being prominently featured in Martin Scorsese’s Academy Award-winning film The Departed. It can be commonly heard at sporting events and on television as a theme song for many sports teams (even outside of Boston). The Boston Garden plays it at pivotal moments throughout Bruins and Celtics games and Red Sox pitcher Jonathan Papelbon uses it as his entrance music when he comes out of the bullpen. The band has sold out shows worldwide and cultivated one of the most fervent fan bases in rock music. They’re an integral part of Boston’s cultural identity and even penned the theme song to the first Red Sox World Series win in 86 years.
« They’re also songwriters–and good ones, too, preserving their party-boy reputation while turning out giant, soulful choruses on songs both manicured and memorable… »
–Christian Hoard, Rolling Stone, September 20, 2007

« …one of the country’s best blue-collar bands… »
–Ben Wener, Orange County Register, July 21, 2008
About The Claddagh Fund
The Claddagh Fund is a charity established by Dropkick Murphys founder Ken Casey in support of non-profits that champion the causes of children, veterans and those suffering from alcohol and drug addiction. The Claddagh Fund is committed to the three attributes symbolized in the Claddagh ring: friendship, love and loyalty. The Claddagh Fund seeks to harness the passion of Dropkick Murphys’ friends, family and fans to significantly improve the quality of life of children, their families and the most vulnerable populations in the community.
www.claddaghfund.org
www.dropkickmurphys.com
www.myspace.com/dropkickmurphys