SO I ATE MYSELF, BITE BY BITE 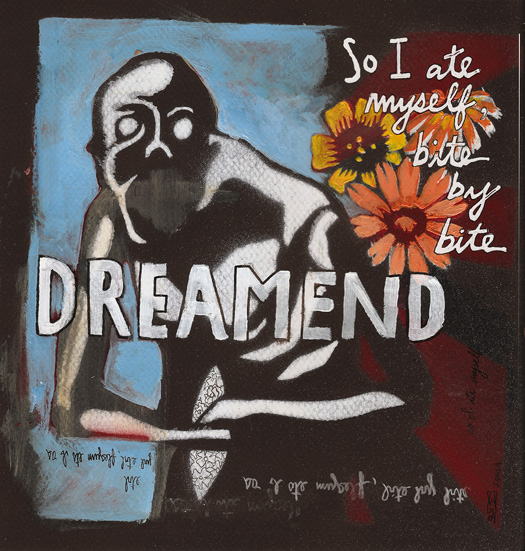 Chicago based Dreamend’s new album, ‘So I Ate Myself, Bite by Bite’ (SIAMBbB) is the latest release from a member of the peculiar electronic band, Black Moth Super Rainbow.

Dreamend is, to all intents, Ryan Graveface, the proprietor of Chicago based independent label Graveface Records, home to a dizzyingly varied bunch of bands (including the aforementioned Black Moth Super Rainbow). The album was recorded with help from members of another Graveface band The Appleseed Cast and was curated by Tobacco of Black Moth fame. It was given a final mix by John Congleton of The Paper Chase.

Whilst the album can be listened to as series of catchy atmospheric folk songs there is also a narrative thread of a character who acts on his destructive fantasies and descends into madness and murder.

The album starts with the deceptively patient ruminations of « Pink Cloud in the Woods »…. sparse cricket sounds, bells and piano evolve into stop-and-go drums and the breathy chant of « I walked through the woods. It was a rainy day. » From there, SIAMBbB sprawls out like a cinematic experience.  “Magnesium Light” is a cleansing moment of melodic pop before the album descends toward the dark. The banjo-laden song « Pieces » delves deep into the details of the murderous crime but remains unsettlingly upbeat and catchy.  Album closer 10 minute closer « An Admission » shifts down the synth highway as it details the character’s seemingly inexplicable need to kill again and again. It starts with pitch bending swirls buttressed by banjo and drums. Soon, these elements are overtaken by stormy effects and soprano « whoo-ooo »s, culminating in an about-face of percussive THRASH.