“There was this feeling inside me going into making this record that we’d never made an album before,” says guitarist/vocalist Scott McMicken of Dr. Dog’s Shame, Shame, their Anti- debut and the first album made outside the safe confines of their home studio. 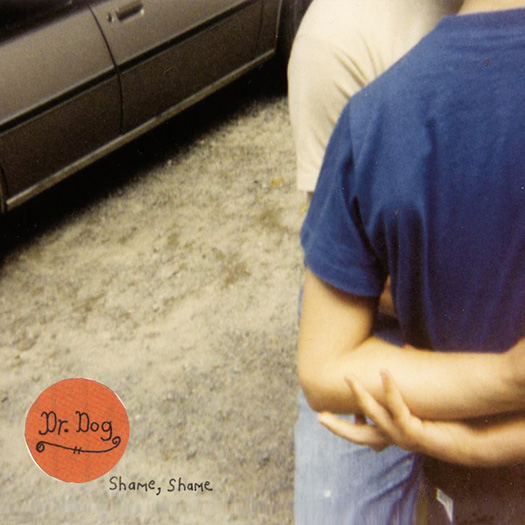 “Four albums ago, we set out with this unspoken or unconscious mission, and I feel like we accomplished that to our own standards of fulfillment. With our last record [2008’s Fate], there didn’t seem to be the next logical step with the general set of sensibilities and aesthetics that we’d been working from up until that point. It felt like a closed book.”
As a band that has traditionally built their scrappily spirited albums layer by layer in the undisturbed seclusion of their Philadelphia studio, Dr. Dog realized they would need to leave these comforts and work in a professional studio with the help of an outside engineer and producer if they were to continue their album-by-album growth. Having evolved from a band whose primary creative outlet was the album-making process into one that increasingly favored the energy of their live performances, they knew they wanted to document the new dynamic they had developed on the road.

In Rob Schnapf (Beck, Elliott Smith) they found a producer who had earned his reputation making albums in much the same fashion as Dr. Dog had, eventually moving on to the bigger and better sounds that they now wanted. With his help, the intricate arrangements of Fate were peeled back to reveal the raw immediacy of a tight five-man unit honing their craft. During these sessions at Dreamland Studios in West Hurley, New York, their unkempt edges were pruned, producing lean and muscular arrangements they could perform live without having to translate violin lines into guitar solos or vice versa. Along the way, what could have been merely a live-in-the-studio detour became nothing less than the culmination and unification of everything they’d done to that point. Founded on a creative relationship whose roots stretch back to when McMicken and bassist Toby Leaman met in the 8th grade, Dr. Dog was years in the making. After long hours practicing in basements, performing in barns, and tweaking knobs on cassette four track machines, Dr. Dog was officially established in 1999 with the Psychedelic Swamp record. What followed was an intense period of stockpiling eight-track recordings, open-ended enrolment policies where Dr. Dog membership included a man who played a onestring guitar in a skintight skeleton costume and another who danced in the crowd while wearing a tuxedo. Despite their loyal hometown following, Dr. Dog could have very well remained a Philadelphia phenomenon had McMicken’s then-girlfriend not slipped a copy of Toothbrush, a collection of home recordings, to Jim James of My Morning Jacket, who would take them on their first tour and prepare the way for the waves of positive press that would greet 2005’s Easy Beat. By 2007, their next album We All Belong was earning the band opening slots for Wilco and the Raconteurs and they were turning up all over late night television. They upped the ante with their sonically ambitious Fate and started headlining their own tours. By the spring of 2009, the treadmill had run them ragged, and their new songs reflected a life spent with the nagging realization that things were out of a balance.

“It’s hard when you spend half your time away from your friends and family to feel like you’re as connected as you could be to the people around you,” says Leaman. “I think that’s a lot of what this album is about. ‘I’m alone of my own making’ – that attitude. You see that all these people have lives and things go on and on, and if you’re in a band it’s pretty much static. ‘What are you going to do this year?’ ‘Well, I’m going to make an album, and I’m going to go on tour.’ That’s your life. You see your friends and you wonder how close you are to the people you feel close to, because maybe you haven’t seen them for months and months. I’m not complaining, because this is all we’ve ever wanted, but it’s a disorienting way to live.” Dr. Dog has created a song cycle of doubt and despair, bookended with the woozily swirling harmonies of Leaman’s lonely opener “Stranger” and the harsh self-critique of the title track, a gnarled admission that sometimes it’s best to admit your mistakes and move on. Their most openly autobiographical release, ranging from McMicken’s exploration of West Philly underlife in “Shadow People” to his account of two soulbearing late night conversations in “Jackie Wants a Black Eye,” it’s an album whose dark themes are soothed by bright harmonies, taut guitar riffs, and soaring melodies. Past stylistic references remain, but the tone is entirely different, with doubt, confusion and unanswered questions. And yet Shame, Shame is not a joyless affair. Just like each of their previous albums, it’s a record destined to claim its place on the timeless margins, untouched by modern tastes and content to exist on its own terms. Dig deeper, and you’ll hear that it’s the sound of bones groaning to support new growth and the story of how just how difficult the maturation process is, even when you want it more than anything. It’s the sound of Dr. Dog writing their next chapter, the one they’ve been working towards since they played their first notes together. “At this point, we’ve set out this buffet for ourselves, but we first had to cook that food and figure out what our tastes are,” McMicken says. “Now it’s time to dig in.”

Selected tracks:
“Station”
“It’s the only song I’ve ever written about touring or anything like that,” Leaman says.
“It’s also about how my wife and I bought a place in Wilmington, Delaware, and it worked out great for us, but we both miss Philly. It’s also about leaving to go on tour, leaving over and over again.”

“Shadow People”
“This one apartment I was living in, I felt like I was stuck in the insane heart of West Philly,” says McMicken. “It’s a weird, insular little community, and there’s a lot going on and a lot of crazy, flamboyant characters and a lot of porch life and coffee shops. But for me, it was kind of overwhelming, and I had overextended myself into the lives of a lot of wacky people, because those are the type of people that I gravitate towards the most. But sometimes I bite off more than I can chew and get taken advantage of. I was exhausted with my neighborhood and I let it into me a little too much. That night, I wrote “Shadow People,” which is a full-on West Philly diary. Philly has been such a big part of our lives, and I feel like on this record it finally took over and made its way into our music. There’s a line that says, ‘I stole a bike from the Second Mile and saw a band play in the basement.’ The Second Mile is this thrift around the corner from my house, and there’s so many basement shows in West Philly, like noisy, artsy bands.” .I wanted to write something about the people and places around me.

“Jackie Wants a Black Eye”
“It’s one of the most literal songs that I’ve ever written, and it was important for me because I had been in a bad state for awhile,” McMicken explains. “I had this one particular night where I was particularly depressed, to the extent that I realized that I needed to get out of the house. So I walked to this bar about four blocks from my house, and I don’t’ even drink, but I knew I’d run into people that I know, and I ran into my friends Jackie and John, who are both the main characters in the song. It turned out that Jackie and John had arrived at the bar that night in a very similar position, where they were both really bummed out about stuff in their lives, and I stumbled into this situation with two people that I could really easily commiserate with. We sat and talked for a couple of hours, and the way I felt upon leaving there versus how I felt when I showed up was such a radical shift that I couldn’t help but feel like there was some greater significance or something to be incredibly thankful for. I went home that night and I wrote that song. I was just thinking back and paraphrasing the things that they had said and throwing in the things that I had said and my assessment in the chorus. And then when we recorded it, me, Jackie, and John sang it. That was something that I was really proud of.”

“Shame, Shame”
“Jim James sings on that one,” Leaman recalls. “I had done three different versions of that, and only one of them did I feel like I liked the way I sung the high harmony. I couldn’t replicate it I was thinking that I would kind of like to get someone who is airy and loud, and Jim just happened to be in town the night we were mixing that. He was playing with the Monsters of Folk down the street, and I just called him up and he was like, ‘Yeah, I’ll come over after the show.’ So it took all of 20 minutes, and he got back on the bus. It was pretty painless.”