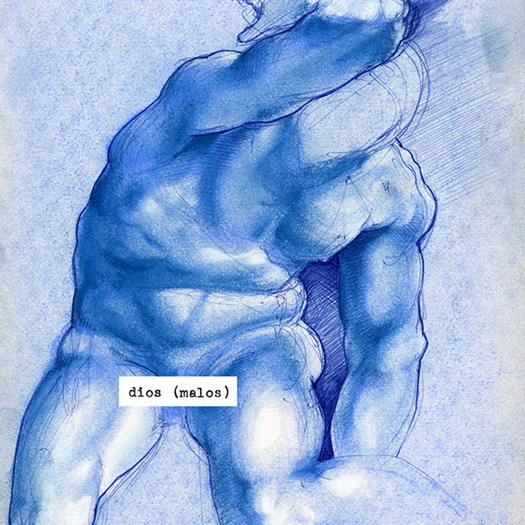 Let’s catch up on 2004, which was the year dios (malos) suddenly changed from unknown lo-fi locals to international bedroom-and-mixtape superstars: « The OC » used an entire dios song to make a dramatic point about pregnancy in the season 2 premier, NME dove in and set them alongside Lil Jon, Franz Ferdinand and the Killers as one of the best bands to watch of 2004 (as well as Top 50 albums of 2004 and Top 50 Singles of 2004), and Morrissey even crept out of his secret lair to ask them to open at each of his five sold-out LA shows. They played Coachella before the Pixies and Radiohead and they even rose high enough for metal-never-was Ronnie James Dio to creep out of HIS secret lair and threaten to sue for the name–that ‘s’ wasn’t enough for his lawyers, and dios gracefully added the (malos).

Guitarist/songwriter Joel Morales also lost his father–heartbreakingly memorialized in the album’s final track « I’m Only Daydreaming. »  His songwriting partner (and younger brother) Kevin left the band.  These are moments he hopes to move past: “Anytime anybody asks about band affairs, we never comment,” Joel says. “It’s like [Cleveland Cavaliers] coach Paul Silas, who was berated by the media when they wanted info on why him and a player had an argument–he said, ‘That’s internal.’” Still, a satisfying year, and they watched it all from the windows of their van, out on tour with Grandaddy (who once covered “Love You (Grrrl)”), the Decemberists, the Fiery Furnaces, Pretty Girls Make Graves, and a sold-out stint with the Shins and Stills (in England).

But it wasn’t until this album that they really left home, pulling out of the garage where they’d recorded every earlier song for a month long album session with Phil Ek at Avast! Studios in Seattle (you may love Phil for his work with the Shins, Modest Mouse, Built To Spill, but dios picked him because of what he did on the last Karp 7”). For a band that once grumbled about just driving up the 110 to Los Angeles, that’s a long time away from family, friends, the Foster’s Freeze–they had some trouble adjusting, and even capsized their canoe in Lake Washington.

And then they recorded their second eponymous record. It’s a record that bounces the familiar drowsy acoustic guitar and the space-y keys, of their self-titled Star Time debut into Phil Ek’s famous knack for the experimental: the <Revolver> psych loop on “So Do I,” the <Palisades Park> carousel-pop of “Tokyo Sunrise,” the official release of kiss-off song “Love You (Grrrl),” the Plastic Ono piano of “I Feel Fine All The Time.” Added into the mix is a more focused aesthetic with regards to playing and songwriting, much of the stoner laid back feel is, instead, imbued with the urgency of 20 year old Jackie Monzon’s drumming and a certain fire acquired from being on the road.  These are the songs dios (malos) has been growing toward since they first set up their 8-track in front of J.P.’s minivan: it’s Beck just after <One Foot In The Grave>, Radiohead just after <The Bends>, maybe the Shins right before < Garden State >? They started 2003 playing a house party and started 2004 playing for thousands; they started 2005 with Morissey behind them and Phil Ek waiting for them, and 2006? “This record is going to go triple diamond,” says bassist J.P. “And win us a minimum of two Latin Grammies.”