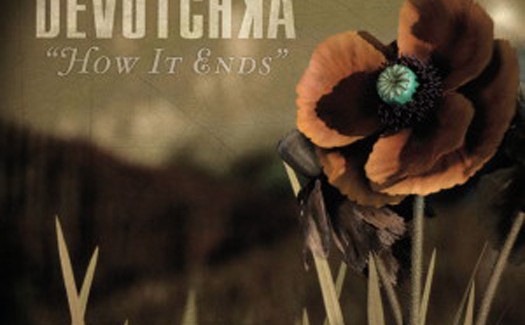 The stage is an instrumental junkyard cluttered by sousaphone, accordion, piano, violin, a bouzouki, an upright bass, percussion, trumpet, drums and a Theremin.

In one corner, a woman sets aside the upright bass to pick up a brass tuba adorned with glowing red lights. She left a traveling Civil War recreationist band to find a home here.

The drummer stands up behind his kit and lifts a trumpet to his mouth. Raised by Lithuanian polka musicians, he skipped out on a treatment center in Mexico to right himself in the study of mariachi horns. Here, he exorcises demons of a punk past and dreams ahead to Mexico.

A slight, black-suited man stands beside a waiting accordion, cradling a violin called ‘Juan Pablo.’ A trained classicist, he abandoned academia to find life and play for the people.

A grandchild of an arranged marriage between a Sicilian and a Gypsy, the singer holds an electric guitar in one hand and with the other draws invisible lines in the air, manipulating a vintage Theremin’s ghostly call. For the past decade—from his days busking in New York and Chicago to the years he has spent crisscrossing the world with these three classically trained musicians—he has been developing and refining the sound that is DeVotchKa.

It wasn’t too long ago that a weary band hauling a violin, a tuba, an accordion, and trumpets into a rock club were told they must be in the wrong place; when a band fusing musical elements from across the globe needed to fight to be considered a rock band instead of being marked by the dubious ‘world music’ tag.

A decade ago, DeVotchKa drove an overstuffed tour van onto a very different musical landscape. Ten years later, it seems the world has caught up with them.

In that time, DeVotchKa put out three increasingly celebrated self-released records (SuperMelodrama; 2000, Una Volta; 2003, How it ends; 2004). On the road almost constantly, their first break came as the pit orchestra for a touring burlesque troupe. Word of mouth spread about the DeVotchKa live experience—tales of trumpeters appearing out of the crowd and braying from balconies; of the band climbing offstage and playing in the center of the audience; of beautiful trapeze aerialists suspended from theatre ceilings; of audiences driven to tears and then dancing in the space of a song.

In 2005, a moment of serendipity rewarded eight years of the band’s hard work. After months of searching, two first-time filmmakers heard the sound of their movie on a Sunday morning Los Angeles radio broadcast, the DeVotchKa song « You Love Me. » Jonathan Dayton and Valerie Faris hired DeVotchKa to score their first film, Little Miss Sunshine. Already established as one of the most exciting underground bands in the country, fittingly it is the story of a van full of dysfunctional underdogs that introduced DeVotchKa’s music to a worldwide audience.

In 2006, the band released Curse Your Little Heart, an EP of mostly covers featuring the band’s take on songs by Sinatra, Siouxsie and the Banshees, and the Velvet Underground. The EP drew great reviews, the Village Voice called it ‘The Stuff of Instant Sonic Obsessions, » and a sold-out tour followed.

In 2007, the band finally answered demand and released How It Ends in Europe on the acclaimed Anti- Records. In the summer of that year, DeVotchKa returned to Tucson’s Wavelab studio to record their first full-length record in four years. The band realigned with producer Craig Schumacher (Calexico, M. Ward, Neko Case) who left his sonic stamp on the band’s How It Ends and Una Volta. The resulting record is very much DeVotchKa– somewhere out of time, certainly out of place, and somehow it makes perfect sense.