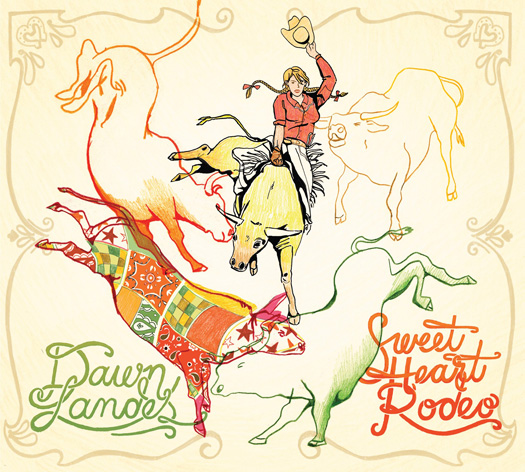 Kentucky-born and Brooklyn-based singer-songwriter Dawn Landes has announced she will be releasing her third album, Sweet Heart Rodeo, on Monday 7th September. The album will be preceded by the release of a digital download single, Romeo (released Monday 24th August), which berates a certain someone who once ruined one of Landes birthdays by standing her up, and borrows a hook from Tennessee Ernie Ford’s fifties nugget of resignation « 16 Tons ».

Landes first came to the UK’s attention with the release of her acclaimed second album (and her UK debut), Fireproof (2008). Q declared it to be « Understated and beautiful » (Q **** Recommended Album), whilst The Guardian called it « vivid girl-next-door indie pop in the spirit of Frente and Cat Powers. » Uncut said « Landes propels the whole project skywards with a voice that encapsulates the best qualities of Laura Veirs and Cat Powers. It’s pretty much essential stuff. »

Sweet Heart Rodeo looks set to garner even more critical acclaim. The title was inspired by Landes great-grandmother’s beau, who ran away to join the rodeo during the Great Depression. A rodeo theme runs throughout the record as she compares the ups and downs of romance to the rigours of bull riding. « Each song is like its own bull, » the twenty-eight-year-old deadpans. « Each ride its own love-story … you know, trying to hang on to a wild thing isn’t always graceful. »

Recorded in Landes own studio (Saltlands in Brooklyn) with regular collaborator, drummer and all-rounder Ray Rizzo, guitarist Josh Kaufman and bassist Annie Nero, the album kicks off with « Young Girl », which ponders gender stereotyping – competitive boys, jealous girls – over a reductive and distorted keyboard riff. The haunting ‘Money In The Bank’ marries down-home hippie wisdom (‘the night before you die, what are you gonna buy?’) to a glorious chorus bolstered by a wistful French horn. Landes even drums on an unlikely cover of Margo Guryan’s already unlikely ‘Love’, a 1968 collision of cool jazz and nascent psychedelia. Rizzo’s idiosyncratic harmonica style (« kinda cloudy- the opposite of ethereal ») boosts the quirky ‘Wandering Eye’, a rare song that combines sex and travel without causing offence, while ‘Little Miss Holiday’ imagines a conversation between Jodie Foster and the teenage hooker that inspired her character in Scorsese’s unhinged « Taxi Driver. » It’s tender rather than bleak. ‘Brighton’ is a tribute to a magical day in that great Southern (English) town, yet it could hardly sound more American, Appalachian even. « I hope I captured it in the song, » she says. Her Brighton though is more romantic than the resort us Britons know, already a fond memory. By the album’s conclusion, the wobbly wedding march of ‘All Dressed In White’, you’ll probably be thinking of giving love a try. Even if it does hurt when you fall off.