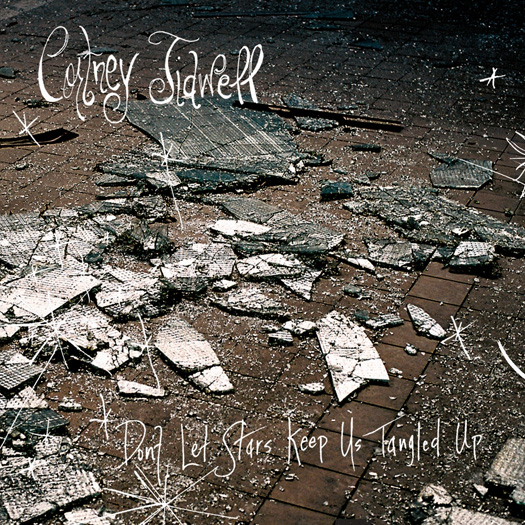 Consider the facts: a grandfather who performed at The Grand Ole Opry and recorded successfully for Decca Records in the 1950s; a mother, a former Miss Nashville runner-up and also a regular performer at The Grand Ole Opry whose own recording career soared in the 1970s; a father who still works on Nashville’s Music Row, having started his career as an A&R for Chart Records, founded in turn by his father.

So why is it surprising that CORTNEY TIDWELL, born and raised in Nashville, Tennessee, ended up making music? After all, this is a woman whose childhood memories include “sitting in the middle of a circle in Jack Clement’s office, surrounded by smoke and laughter”, a woman who grew up listening to Hank Williams and Johnny Cash, a woman who remembers Townes Van Zandt as a friend of the family rather than a tragic cult artist.

The answer is pretty simple: the laughter, and subsequently the music, dried up. In 1976 CORTNEY TIDWELL’s mother was diagnosed as manic depressive. Her career, which had so far included a number of chart hits, ground to a halt. She became seriously ill, and her outbursts were so extreme that, Cortney recalls, “they kept me from coming out of my room most of my childhood life”. She divorced and by the end of her life – she died in 1999 aged just 49 – Cortney’s mother was so paranoid that the sound of helicopters was enough to convince her that she was about to be taken away. For Cortney, deeply affected by her mother’s illness and subsequent passing, music was permanently associated with misery. “Night after night she banged on her piano,” she remembers, “the one that’s now in my basement, playing the saddest songs imaginable. I would awaken most nights to the sound of that piano, and I hated it”. And so Cortney tried to keep music at a distance for fear that she, too, would end up sucked into its vortex.

But, as so often happens, music ended up offering Cortney a lifeline. “Now the sad songs come from me on that piano,” she concedes. “It seems like I thrive musically in times of adversity. I write songs when I feel dark and there’s no way out. I wrote the songs on my mini album right in the midst of my mother’s death and my best friend’s suicide. It was a dark time.”

It was this darkness, however, that inspired a music of fascinating beauty: staggering, desolate, country infused laments sprinkled with subtle flourishes of electronics; skeletal, eerie, haunting structures that reach out far beyond their geographic roots. And CORTNEY‘s voice is even more remarkable, a thing of magic, an arresting and vulnerable instrument that recalls the likes of Leslie Feist, Hope Sandoval and Liz Fraser whilst maintaining a character all its own. “I’m inspired by children’s laughter, the night sky, ghosts and other people’s turmoil”, Cortney Tidwell explains, somehow encapsulating the unique mixture that characterises her work so far.

Those who seek to find the roots of Cortney’s otherworldly music may be interested in the fact that her great grandfather worked as the caretaker of one of Tennesse’s biggest cemetaries, Mount Olivet. “My grandmother was actually born in the house on the premises,” Cortney marvels of a place that holds a special place in her heart. “I learned how to drive there. I even lost my virginity in that cemetary. I’m very fond of it.”

Cortney resisted the lure of music for as long as she could, but finally gave in during her early twenties when she began singing in a covers band, before forming a punk duo with her friend Laurel. It was when she started recording at home, however, that the music took on a life of its own. Songs were largely written through improvisation, mainly as a means of escape – until she signed her deal Cortney had only left the US once, when her mother ran away with her to Montreal – but they were never really intended for public consumption. Even when she started playing live she did so in the surroundings of places like Nashville’s legendary Springwater, a dive bar – popular with local indie bands like Lambchop –where the punters systematically ignored her, and where chicken wire was probably only missing for budgetary reasons. But it was here that she found her voice.

“Playing live is like an out of body experience”, she comments, and so people’s initial lack of interest – early shows were drowned out by the chatter of the audience, something that never bothered Cortney – allowed her to develop her onstage performances unhindered. Now her gigs are becoming the thing of legend in Nashville as she sings from behind between keyboards, guitar or drums, sometimes even singing, drumming and playing the omnichord at the same time. It was following one of these concerts that she ended up signing her record deal, when she opened for Lou Barlow and so impressed him and his tour manager that the latter recommended her to the nascent Ever Records.

CORTNEY TIDWELL’s debut mini album was released in the UK only in March 2006. Her debut full length album DON’T LET STARS KEEP US TANGLED UP was recorded during the second half of 2005 in Nashville, and features guest appearances from Kurt Wagner and William Tyler of Lambchop, Jonathon Marx (a former founder member of Lambchop) and Ryan Norris of Nashville electronic act Hands Off Cuba. It was co-produced by TIDWELL and her husband Todd.