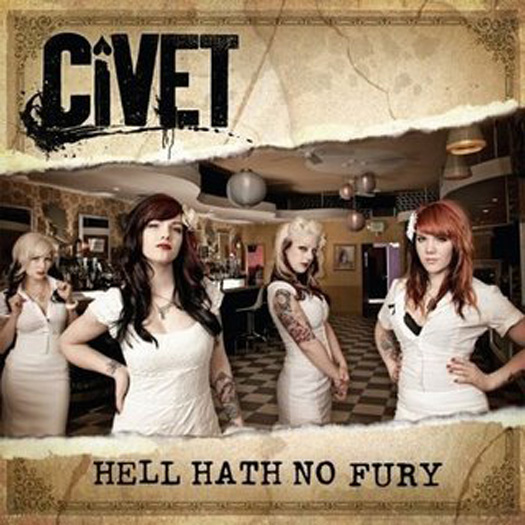 Hell Hath No Fury is the Hellcat Records debut from Civet, the hottest all-girl rock n’ roll band (both literally and figuratively) to erupt from the Los Angeles rock scene since Joan Jett and Lita Ford formed The Runaways.

And to update and polish the old cliche in punk terms: Hell Hath No Fury like four tattooed girls turned on by Motorhead, Murder City Devils and Rancid blasting through an album’s worth of troubled-relationship fueled jams.

« It’s definitely a little bit more aggressive than the stuff we’ve done in the past, » lead singer / guitarist Liza Graves reports happily. « We felt empowered, but not like, Riot Grrl empowered. This is definitely our big coming out record. »

Civet brings the power but they also bring the fun, combining the bold confidence of a band like Bikini Kill with the dirty-sexy appeal of trailblazing rock n’ rollers like The Rolling Stones and the rollicking bounce of The Clash.

Hell Hath No Fury is incredibly diverse but held together by an overwhelming sense of adventure and playfulness. Where a song like « Bad Luck » is breakneck fast, the title track is no less powerful but super-duper catchy. « All I Want » was co-written with Rancid’s Tim Armstrong, who signed the band to his Hellcat imprint. (« It started out as a song Tim had written for someone else, a pop singer or something, I think, » explains Liza. » He really wanted us to do one of his songs on the record and we were like, ‘Sure, why not?’ Tim and I had to sit down to make it work for this band. »).

Liza points to the surf-rockish lead single « Son of a Bitch » as one of her favorites. « It was the last song we wrote. That’s probably the direction the next record is going to go. It’s different than what we’re used to doing. »

Liza says the four girls in Civet recognized a distinct vacuum in the scene when they formed the band a while back. « It became clear right away that this is exactly what we were supposed to be doing. We truly wanted to fill the void we saw, because tough all girl bands were few and far between. Civet took on a whole life of its own. It became not only a band, but a way to travel, meet lots of amazing people, get our message across, and show people that girls can be real and play rock n’ roll. It’s not all about acoustic girl’s night, it’s about balls out rock n’ roll, dressing how you want, saying what you want, doing what you want and being a role model. We feel that when we play. »

The group’s early shows and material and underlying « woman scorned » and « tough times » message drew comparisons to everyone from girl-fronted bands like Hole and L7 to Backyard Babies. Their self-described « Femme Fatale Punk Rock » caught the attention of Disaster Records, who released their last album, Massacre. Disaster founder and US Bombs frontman Duane Peters produced the album and Civet remains friendly with the Disaster Records camp.

Hellcat was just a logical progression. « We wanted to stay true to our punk rock roots, while getting our music out to a larger fan base, » Liza explains. « Hellcat is balls out, do or die, punk rock! It’s home! »

Producer Julian Raymond helped the band lay down the 13 tracks of madness that comprise Hell Hath No Fury, Civet’s biggest, baddest and best album thus far. While the album is certainly a bit more polished its not lacking in Civet’s signature aggression and will no doubt appease fans both old and new. « I’d say we branched out on this record a lot more trying some things we’ve never tried. We felt a lot more confident in the actual recording process this time and we’re definitely not afraid to be ourselves and put our music out there. This record is very unapologetic. »

With Hell Hath No Fury as the soundtrack, Civet plans to take their music and message to all of the corners of the earth on tour. « Our goal is to get out there as a girl band and prove that we can play music and do it well, » Liza says in summation. « We love to be inspiring to both women and men alike. »