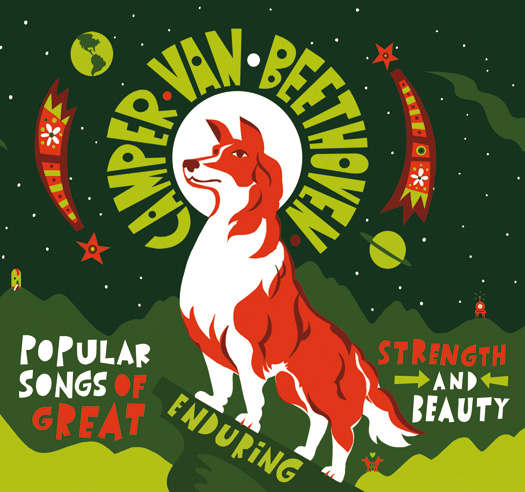 Behold! The popular song of great enduring strength and beauty.

But what is it that makes a popular song?

Mostly it has to do with repetition – not only the repetition that Camper Van Beethoven experiences in their renaissance as a band, after years of solo activity among its members, reformed for a new century and playing music they had played before, repeating and updating the performance of a music that came before « alternative » was mainstream, the repetition by means of muscle memory more than thought—no, not only this, but also, also too, that virus in your ear that will make a piece of music « popular »: the ear worm. The ear worm repeats what a listener hears, repeats it within their own mind, forcing them to replay the melodies and forms of a song in the confines of their own head, cunningly suggesting that only by listening to the song once yet again will this repetitive pop virus be eradicated, burned from the brain.

But in actuality, it may never leave, and you, dear listener, will be coerced by this worm again and again to listen to this very CD, a precisely created and lovingly produced collection of some of Camper Van Beethoven’s finest, most enduring, strongest and most potent phonological loops.

Available on CD and as a digital download bundle, “Popular Songs” features 18 tracks, 5 of which have been re-recorded specifically for this release. Explains Camper Van Beethoven band spokesperson, Col. Jack “Cheese” Sandwich (ret.) of Limone sul Garda, Italy : “We endeavored to present an enticing set of popular songs from the much-acclaimed « secondary and tertiary recording periods » of the band, 1985-1990. We were, however, thwarted in this effort by a certain recording company which had released the later (tertiary) output of these original recordings. We made offers to buy back our own catalog, but they were rebuffed. Hence, still owning the publishing rights, we decided to re-record a few of these later songs. We have attempted to remake them to so closely resemble the original recordings as to be essentially exact forgeries, but keen ears may be able to sense an underlying maturity that the originals might have lacked. We apologize for that, but it couldn’t be helped.”