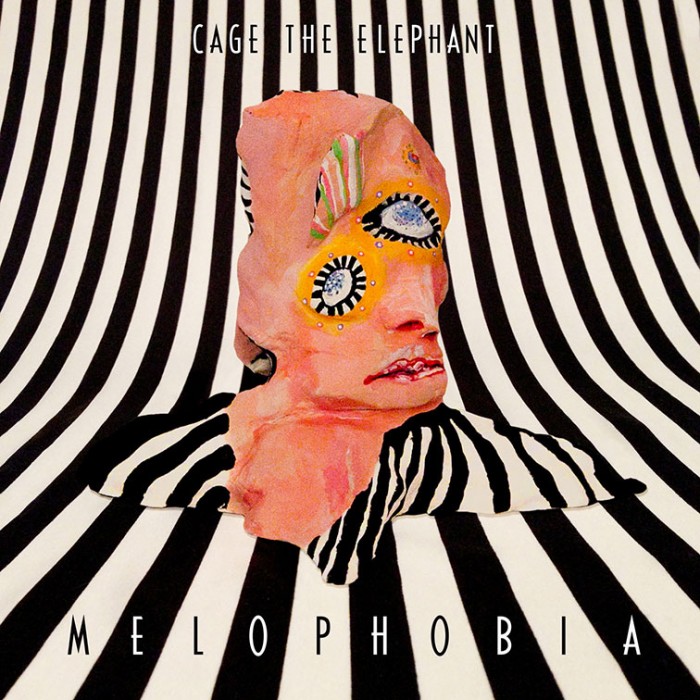 Concert à la Maroquinerie le 18 février MELOPHOBIA’ Sortie Prévue le 17 Février 2014 Mercury Music Group, Universal Music Group On Cage The Elephant’s third album, MELOPHOBIA, the rock band was faced with the challenge of finding cohesiveness in the ideas of five different people. After touring for nearly five years straight on their prior releases, 2008’s Cage The Elephant and 2011’s Thank You, Happy Birthday, the musicians took some time off the road, to write as individuals before getting back together in August of 2012 to begin work on MELOPHOBIA as a collective. “As individuals we all had fairly vague visions for how we wanted the record to turn out,” lead singer Matt Shultz says. “They were pretty polar. It really became a challenge to combine all these polar opposites together in a cohesive way. We first started writing material that was very intimate and had a very kind of close and hushed sound to it, but our hearts missed that energy and swagger and playfulness we love so much. Once that came to light, the record really started taking shape on its own. It was the uniting of several different ideas that were really different from each other.” The album, a varied collection of unabashedly vivid and notably thoughtful rock songs, was written and recorded over the course of a year, with various recording sessions taking place at St. Charles Studio in Nashville over the winter and spring with longtime producer Jay Joyce. The approach was highly experimental and based around the idea that that you don’t write a song, you find it. Along with Joyce, the band focused on bringing each track to its greatest potential, which sometimes posed a significant challenge. Throughout the process the musicians stopped listening to other musical recordings almost entirely and Matt Shultz drew songwriting inspiration from listening to those around him interact. “I wanted the making of this music to be comparable to drawing your childhood house purely from memory,” continues Shultz. “Your mind recreates things that aren’t based so much on physical truth but more based on emotion. I can speak from my own personal experience that pride and fear are always the enemy when you’re creating. Sometimes we cater toward certain sounds or approaches or deliveries because that is what we think society at that particular time has deemed artistic and we totally lose sight of the fact that art is a form of expression. On this record, lyrically and musically, we really strived to be better communicators.” The album’s flagship single “Come A Little Closer” is a boisterous, blues-laden rocker and was one of the first songs the band completed for the album. The song marries the raw energy and playfulness the band is known for with their present interest in creating intimately expressive music, both in its pensively poetic lyrics and surging melody. That sensibility carries over to “It’s Just Forever,” the final track the band laid down, which features guest vocals from The Kills’ Alison Mosshart. Mosshart’s yelping croon builds the intensity of the stomping number, an apt juxtaposition to the mid-tempo soulfulness of album standout “Hypocrite” and acoustic closer “Cigarette Daydreams.” Overall the album captures familiar sounds in a new way, balancing a nostalgic sonic aesthetic with a fresh, innovative sensibility and embodying a truly classic voice. MELOPHOBIA resonates with a sense of joyful abandon, which comes from facing those initial challenges head on. “The more intensely we worked on it and the more we put it under a microscope, the more afraid we became of it,” Shultz adds. “Then we had to overcome that. Sometimes it’s not the most fun thing in the world and sometimes it’s jubilation. Immense joy. It was all about overcoming that fear of creating music under false pretense or with skewed intent.” MELOPHOBIA follows Thank You, Happy Birthday, which debuted at No. 2 on the Billboard Top 200 and has sold over 250,000 copies to date. The album’s single, “Shake Me Down,” spent six weeks at No. 1 on Alternative radio, following Cage The Elephant’s 2009 breakout single “Ain’t No Rest For The Wicked,” which landed in the Top 5. Cage The Elephant has sold over 550,000 copies to date and spent 73 consecutive weeks on the Billboard Top 200. The band has toured extensively, selling out several headlining runs and performing alongside Black Keys, Foo Fighters, Queens of the Stone Age, Muse, Stone Temple Pilots and Silversun Pickups. For Cage The Elephant, who originally hail from Bowling Green, KY, the aim is to always improve and evolve, ensuring that each subsequent release and tour represent a step forward. In that way MELOPHOBIA is not so much about a fear of music but a fear of not pushing music to its potential. “You hope that you naturally evolve as a person and you’re able to apply the things that you’ve learned to your creative works,” Shultz says. “Sometimes you have to push yourself out of your comfort zone in order to keep yourself from getting into this place where you’re just dialing it in. That’s what we’re really afraid of.” Cage The Elephant consists of singer Matt Shultz, guitarist Brad Shultz, bassist Daniel Tichenor, guitarist Lincoln Parish, and drummer Jared Champion. Melophobia Track Listing