KING FOR A DAY 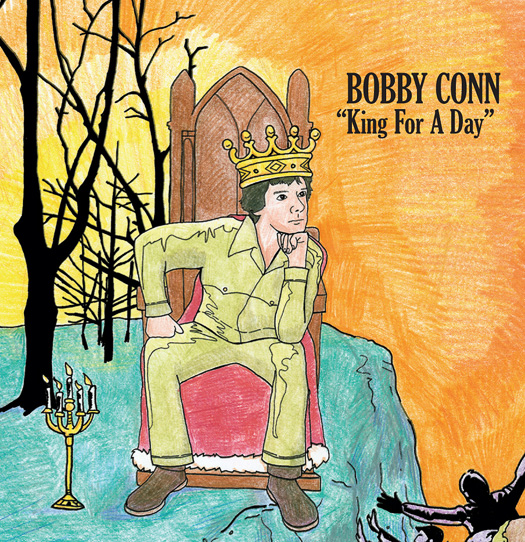 The Golden Age marks the return of Bobby Conn after a three-year hiatus. In the course of that time a lot has been written and discussed as to his whereabouts, personal habits and just exactly how he could ever top the sonorously operatic masterpiece, Rise Up! Public appearances were rare and the time away left many wondering, « Where’s Bobby? » A brief foray into the field of EP’s had yielded Llovssonngs, a short collection of testimonials about, well love and there were sightings of Bobby on television and in politics, but nothing ever concrete was substantiated. Speculation abound, Bobby was at home creating. Creating music, life, art and of course the new Armageddon.

The Golden Age is the fun-filled final solution for the « classic rock » problem. Its nine happy songs describe a pathological society where adolescence is prolonged eternally, and cultural nostalgia is carried to its furthest extreme. It’s a place where everyone wins, no matter how much they lose.

Sonically, it’s an attempt to distill a lifetime of Midwestern top forty into 40 minutes. I suppose this makes it « post-modern, » but consider this, if you hired two plumbers to make a replica of the Taj Mahal out of tapioca pudding, would the result be great architecture? Not likely, but it would still be delicious. Sometimes art transcends (or betrays) the intent of the artists.

The sound of suburbia being burned to the ground. The sound of too many SUV’s, too many teenagers high on Ecstasy and the impending « No Revolution » revolution. A golden age forged in the cul de sac’s of Roving Hills and Sleepy Meadows where culture hasn’t been reduced it’s been sodomized. While sweeping statements and generalizations highlighting the morally bankrupt outposts of « city limits » are more easily written than researched we decided it was best to let Bobby speak about himself, his new record and the things he surrounds himself with.

Wasn’t he supposed to be the Anti-Christ or something?

No, of course not. That’s a silly question.

Is Bobby Conn his real name?

No. Bobby is a nickname he’s had since childhood, because he’s so cute and cuddly. His real name is Robert Robert Conn.

Apparently both of his grandfathers were named Robert and his parents wanted to honor them equally.

How old is Bobby?

Sometimes he looks pretty young, but up close he’s all weird and creepy. Bobby was born on June 13th, 1967. Since 1998, Bobby has resorted to dramatic make-up and fanciful costumes to distract audiences from his fading youth. The ravages of time may have pitted and cracked his once boyish appearance, but there’s still a kindly twinkle in his eye, just like Santa Claus.

Is Bobby an American citizen?

I’ve heard rumors that he’s from South America or an Isreali.

Yes. Bobby is as American as apple-pie. He was born in New York City, but moved continuously throughout his childhood, spending several formative early years in Argentina and Brazil, where his parents helped further the interests of powerful multi-national corporations. Most of his adolescence was spent in several different suburbs of Chicago, IL, where Bobby lives even today. He has never traveled to the Middle East.

How tall is Bobby?

My friend says an average person could pick him up and drown him in a teacup.

Tell your friend to be careful, because Bobby has taught himself how to swim and certainly wouldn’t flounder in a mere teacup. But he is smaller than the average hulking, obese, hormone-dazed American male. He is a compact 5’4″, seeming slightly larger on stage with the aid of special shoes, customized miniature instruments, and the specially trained midget session musicians who accompany him.

Does Bobby have a criminal record?

No. Absolutely not. His social security number is available upon request to nosy journalists. Check him out; he is as clean as the freshly driven snow. He doesn’t even have any traffic violations anymore. He’s totally straight. End of discussion.

He’s 110% pure entertainer, with all the rich cultural heritage that implies.

What are Bobby’s hobbies?

Right now, he is just crazy about helicopters. He has many toy « choppers » and subscribes to many rotary wing aviation magazines. He is convinced that once he owns one, he will achieve personal freedom and mobility on an almost spiritual level. He spends much of his time designing helipads and heliports for his home. He is also an excellent cook, and enjoys tending his roses.

Is Bobby nice? Does he act all freaky?

No, in person he has the demeanor of a shy professional golfer. He tends to stand in the corner of a room until no one notices him, and then he’ll get on his hands and knees and scurry around between your legs like a large cockroach. He can be very kind, especially to animals and children. He has an elaborate series of hand signals he uses around strangers to communicate. But he’s easily ignored. He’s basically harmless.

What about Bobby’s love life? Is he seeing anyone?

Naturally, very few people are curious about the personal life of a star of Bobby’s magnitude. Once enough people do ask (and we are still waiting for the first inquiry), we may publish a small pamphlet we have prepared entitled « A Beginner’s Guide To Romance: Bobby Conn. » Until then, mind your own business.

What about politics? Does Bobby support any causes or charities?

Bobby understands very deeply how important celebrities, whether they are big and tall or very small, are as role models. He knows that many look to him to set an example for their own lifestyles and beliefs. He truly considers himself, « America’s conscience, » and judging from the amount of personal involvement most Americans have in civic life, he’s had quite an impact on the status quo.

Does Bobby do drugs?

He seems kind of druggy on stage, and I’ve seen him stumble a lot.

Not really. Bobby is, however, very suggestible and will tend to eat or smoke anything he is given. Generally, he is cold sober on stage, because he feels drugs « make me sleepy and cranky. » His awkwardness results from damage to his inner ear, which confuses his brain into thinking he is upside down. He can be a dangerous driver.

Is Bobby just a « man in the suit », like Johnny Bravo or George W. Bush, or does he actually know what he’s doing?

Don’t worry; Bobby is in control at all times. Bobby’s unique management style allows him to delegate many responsibilities to other talented professionals who are attracted to Bobby’s own professional talent. I myself, for instance, was an undergraduate communications major at the University of Illinois when I saw a listing for a « public relations intern » on the job board. And when school starts back up in the fall, I’ll never have to write another fucking word about Bobby Conn. He’s a perfectionist. He was docking my pay $5.00 for each misspelling until I pointed out that I’m not actually even getting paid. He said I could just owe him then. Fucking prick.

But his persona seems so ironic and archly calculated, and yet live he comes off as desperately sincere.

It’s hard to say. The little fella is just a good actor, I guess. Either that or he’s terribly deluded.