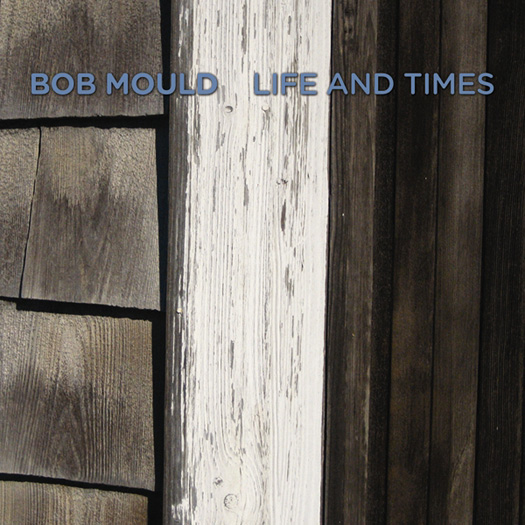 Don’t be thrown by the title. Life And Times, the ninth solo album from Bob Mould, is not autobiographical. That these ten ruminations on the fragility of relationships resound so powerfully speaks to Mould’s abilities as a writer and performer, but the source material wasn’t torn from his diary. “These are things that happen to all of us,” he clarifies. Diehard fans craving inside dirt must wait for the 2010 publication of Mould’s memoir; Life And Times is aimed at a broader audience.

Nor is Life And Times some sprawling Dickensian epic. Featuring ten selections, and a running time just over 36 minutes, the album is deliberately concise, shorn of musical or lyrical flab. “There were a couple of songs that didn’t make the cut,” he admits. “They fit the theme, but weren’t as provocative as the material that made the record.”

Folks familiar with Mould’s oeuvre—from his days in seminal punk rock band Husker Du, through the rise of alt-rock faves Sugar, and his ongoing work as a club DJ—may recognize a few of these tunes already. “City Lights,” “The Breach,” and “I’m Sorry, Baby, But You Can’t Stand In My Light Any More” were all road-tested when he toured in support of his 2007 retrospective DVD Circle of Friends. Two years later, “Sorry, Baby,” and the careful way its concerns turn as the song advances, remain disarming. The title may evoke a chuckle, but there is no laughter when it ends.

Although very much of-the-moment, Life And Times does mark a couple important anniversaries. It has been 30 years since Husker Du made its on-stage debut in 1979. Ten years later, Mould released his debut solo full-length, the critically acclaimed Workbook. And, according to the artist, the genesis of Life And Times was very similar to that second milestone.

“The concept was to put myself in the compositional space I was in back in 1988,” he explains. “Not so much sitting on a farm by myself, writing songs in the wake of the breakup of Husker Du, but in the mechanics of writing.” Back then, pieces of non-rhyming prose evolved into songs as improvised music was crafted to complement the words, yielding classics like “Heartbreak A Stranger” and “Brasilia Crossed with Trenton.” “On Workbook, the stories came first, and the music later. The idea was to revisit that approach, since this release would line up with the 20th anniversary.”

Like all most of his work in the 21st century, starting with Modulate (2002), Mould—who currently resides in Washington, DC—made Life And Times in his home. “This has been the decade of writing and recording at the same time.” He played everything himself, save for the drums, which were supplied by Jon Wurster of Superchunk. “His playing is unbelievable on this,” admits Mould. The fact Wurster laid down all his parts in just four days, without having heard the songs prior, underscores the immediacy of the material.

Life And Times does not sound like a “homemade” record, the reflections of someone padding around in their slippers, lost in navel gazing. Though Mould originally began writing on acoustic guitar, not long after the composition of the first three songs (featured in order on the CD, starting with the title cut), with the arrival of “MM 17” he picked up the electric, too. Consequently, the disc mixes soft and loud textures; the solo in “Spiraling Down” instantly reminds the listener why Mould is still considered one of the most distinctive guitarists around.

Other highlights include the punk-as-fuck “Argos,” a blistering eyebrow-raiser that was the final song added to Life And Times. “I wrote it for my theoretical gay punk rock band, and somehow it got into the real world.” On “Bad Blood Better,” Mould composed a vocal melody that leaves him remarkably exposed. “That one is a little more vulnerable than anything I’ve done in years,” he admits. There are new lyrics, like “Can you get off your high horse/This is the end of the ride” (from “The Breach”), that rank alongside his best.

The album concludes with “Lifetime,” an atmospheric cut full of layered keyboards and harmonic gray areas that fills a gap in the Bob Mould canon. “I’ve never really written my ‘I Love Music’ song, romanticizing the radio, the religious experience that music is, and what it meant to me as a kid.”

Life And Times does not flinch from the past. The dust and aromas that trigger unexpected memories in the title tune are very real, remnants from Mould’s years in New York that were unexpectedly disturbed while making the album. Do not mistake the willingness to glance back, or the conscious embrace of an older writing style, for nostalgia. (Ditto the absence here of club-friendly electronics; he simply prefers to channel that creative impulse elsewhere these days, as evidenced by the popularity of his Blowoff events with Richard Morel, and remixes for acts including Interpol, Low, VHS or Beta, and Rammstein.)

2009 is a year of anniversaries for Bob Mould. But milestones and millstones are very different things. With Life And Times, Bob Mould reiterates his prominence as an artist not just in the here-and-now, but for the future as well.