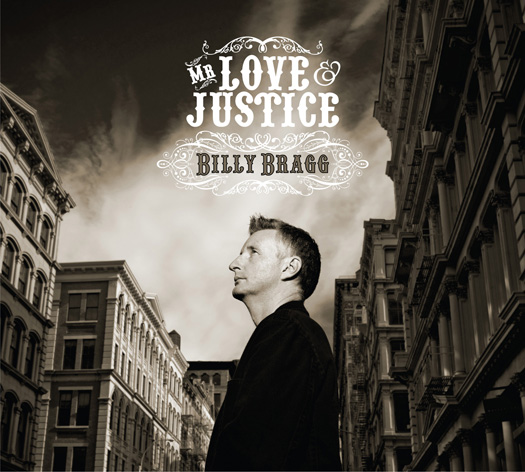 ‘Mr. Love & Justice’, the new album by the great English songwriter and performer Billy Bragg, is in stores on Monday 3rd March.

Preceding this Bragg has had a very active year and so too have a growing number of much younger musicians that are discovering his music.

Bragg made a special guest appearance with Kate Nash at London’s Union Chapel on 26th November 2007. This show was part of the Little Noises Sessions which is curated by Radio One’s Jo Whiley in aid of the Mencap charity.

This was the second time Bragg had appeared with Nash – they shared a stage at London’s Electric Ballroom earlier in 2007 as part of the Camden Crawl.

Nash later told the NME: « When I watched him at the Electric Ballroom it was the best thing ever, to see him, one guy, one guitar and for him to have such an effect on such a huge amount of people. Everyone was smiling and singing along. It’s about connecting with people. »

Billy celebrated his 50th birthday at London’s Queen Elizabeth Hall on Sunday
9th December 2007 when, in conversation with Jude Kelly, artistic director of the South Bank Centre, he discussed the political and musical influences that had shaped his life. The event brought to an end a memorable 25th anniversary as Billy ’s first solo gig was opening for the Sensible Jerseys at the North London Polytechnic Sociology Department annual disco 25 years ago in March 1982.

In addition to recording the new album, Bragg’s anniversary year has been highlighted with a number of key initiatives, events, awards and performances including:

the creation of ‘Jail Guitar Doors’ which aims to buy instruments as part of the rehabilitation process for prisoners in UK jails. The initiative hit the headlines in July 2007 when Mick Jones, the esteemed guitarist and co-founder of The Clash, joined Billy for a gig at Wormwood Scrubs prison in West London. The Enemy – recently voted Best New Act in the 2007 Q Awards – are also contributing their services to Jail Guitar Doors. Says Tom Clarke, the band’s vocalist and guitarist: “I’m with Billy Bragg’s thing. It really helps with rehabilitation, you know. Eighty per cent of prisoners who go through this scheme don’t re-offend. Fact.” For more information, see www.jailguitardoors.org.uk.

Q magazine’s prestigious ‘Classic Songwriter’ award, presented to him by KT Tunstall at the Q Awards on the 8th October. In her presentation speech, Tunstall said: “I wish Billy was my history teacher or older brother!”

appearances at a number of book festivals throughout the year, with Bragg speaking about his much-acclaimed polemic, ‘The Progressive Patriot: A

Search For Belonging’, published in 2006. Billy used the publication of the paperback version as an opportunity to speak out against the rise of racism in Britain. Indeed, in April 2006 Bragg embarked on the Hope Not Hate tour, a special series of concerts in support of the UK’s leading anti-Fascist organizations.

the commission to write a new English lyric for ‘Ode to Joy’ from Beethoven’s Ninth Symphony. Bragg’s new version was unveiled at the South Bank Overture Festival on 10th June 2007 as the culmination of the re-opening of London’s Royal Festival Hall. It was performed by 1500 amateur choristers accompanied by the London Symphony Orchestra. Bragg’s ‘Ode to Joy’ was repeated in front of the Queen on the 10th October and Bragg was introduced to her as well!

a duet with KT Tunstall at the Talking Bob Dylan Blues tribute concert on 26th September. The show, recorded for a BBC TV special at London’s Barbican, was also compered by Billy, who performed ‘This Wheel’s On Fire’ with Tunstall

Since the release of his previous album, ‘England, Half English’ Bragg has chronicled his entire career with two box sets released in the spring and autumn of 2006. They contained all of Bragg’s studio albums together with EPs, singles, B-sides, covers and rare outtakes as well as DVDs of UK television’s South Bank Show and concert footage from Bragg’s shows in communist Eastern Europe during the late-80s – places where very few Western musicians played at that time.

Other new generation musicians to come out as Bragg fans are The Nationwide Mercury Prize-shortlisted Hard-Fi who invited Billy to support them for six nights at London’s Brixton Academy in May 2006. The band later covered Bragg’s ‘Levi Stubbs’ Tears’ for a BBC Radio One session.

Jamie T – another artist shortlisted for the UK’s prestigious Nationwide Mercury Prize – recorded a version of Bragg’s ‘A New England’ for a recent B-side while Get Cape. Wear Cape. Fly, the new band led by Sam Duckworth, asked Billy to support them at a gig in London’s Wandsworth Prison. Bragg has now also performed on the band’s forthcoming album.

They are joined by the legendary Robert Wyatt, the guest vocalist on a track called ‘I Keep Faith’ recorded in South Thoresby, Lincolnshire. The collaboration came about when Bragg, in search of fresh rhubarb for a crumble, was in nearby Louth where he met Wyatt who lives in the town. “I hadn’t seen him since Red Wedge (the 1986 Labour Party youth vote initiative),” says Bragg. “He found me some rhubarb and then came along to the recording session and sang beautiful vocals to the chorus of ‘I Keep Faith’ – it was like angels singing!”