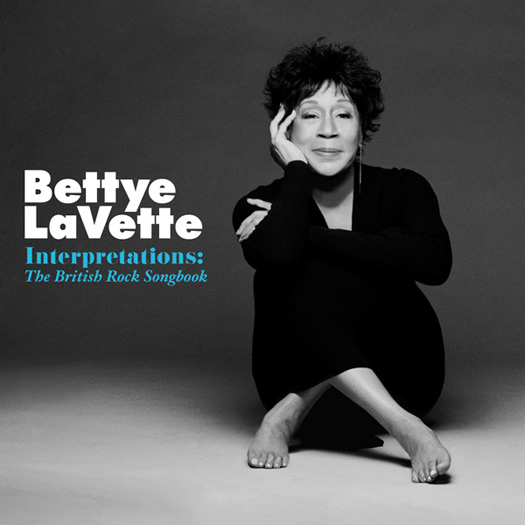 It’s simple really. Virtually anyone who has ever heard Bettye LaVette sing immediately grasps that she is in possession of one of the most singularly unique voices in American music history. It is a voice that is capable of levels of timbral nuance, pitch inflection and rhythmic phrasing that most singers can only dream of. Informing that incredibly supple instrument is an artistic sensibility that allows LaVette to get to the core of any song she cares to sing, turning it inside out and back to front. The net result is that she is capable of making songs, no matter how familiar, her own, affording her audience the opportunity to hear material they have known for years as if for the very first time.

LaVette’s ability to interpret songs in this manner is a rarefied gift bestowed on only a handful of heavyweight vocalists such as Frank Sinatra, Tony Bennett, Sarah Vaughan and Billie Holiday. With her new album, Interpretations: The British Rock Songbook, the diminutive singer from the Motor City has earned her rightful place as one of the great interpreters of popular song.

Soul’s music mavens have known what Bettye has been capable of for years. The powerhouse singer stormed into the R&B Top 10 with her very first recording, 1962’s insouciant “My Man-He’s A Lovin’ Man.” Although she would hit the lower and mid-range of the R&B charts five more times through 1982 with stunning recordings such as 1965’s “Let Me Down Easy,” for the better part of forty years LaVette toiled away in obscurity, slowly fading from the consciousness of all but hardcore soul collectors.

Things began to turn around in 2000 when French soul collector Gilles Petard licensed from Atlantic an unreleased album that she had recorded back in 1972. Issued as Souvenirs in France on Petard’s Art and Soul label, the CD was hailed as a previously unknown soul masterpiece. Gaining traction, LaVette recorded a live album for the Dutch-based Munich label and in 2003 issued a new studio album, A Woman Like Me, on Blues Express. The latter helped Bettye win the coveted W.C. Handy Award in 2004 for “Comeback Blues Album of the Year” as well as the Living Blues critic pick as “Best Female Blues Artist of 2004.”

Noting the mounting critical approbation that was being lauded on LaVette in the press and the stunning word of mouth that followed her every performance, Mike Kappus urged Andy Kaulkin to go see Bettye perform. Kaulkin did not need much convincing and signed her to ANTI-, where she released the spine tingling I’ve Got My Own Hell to Raise in 2005 and the equally incendiary, Grammy nominated The Scene of the Crime in 2007.

The genesis of this album, Interpretations: The British Rock Songbook, came about nearly by chance. In September 2008 LaVette’s booking agent had called producer Michael Stevens to propose that Bettye perform at the Kennedy Center Honors in December for honoree George Jones. While the performers for that show segment had already been selected, Stevens was curious and went on YouTube and found LaVette performing Dolly Parton’s “Little Sparrow” at a festival in England. Stevens was taken with what he describes as the “experienced, world weary, moving and thoughtful elements” in Bettye’s voice.

Later that fall Stevens was contemplating the best way to connect Honorees Pete Townshend’s and Roger Daltrey’s work with their rhythm and blues roots. LaVette immediately came to mind. When Stevens showed music director-arranger Rob Mathes the YouTube clip, Mathes immediately got it.
Bettye LaVette was the perfect choice to sing the Who’s “Love, Reign O’er Me” as a stirring soul ballad. An unknown quantity for most of the audience in the theatre that night, (and later on national television), LaVette, in her typical manner, utterly transformed “Love, Reign O’er Me,” wringing nuances of meaning out of the song that even Townshend didn’t know were there. Her incandescent performance stole the show, moving Townshend to sing her praises to both the press and on his blog.

One month later, Stevens was producing the telecast of the festivities on the steps of the Lincoln Memorial for President Obama’s inauguration. Moved by LaVette’s reinterpretation of “Love, Reign O’er Me,” and sensing Bettye could bring weight and personal experience to one song in particular, he asked the powerhouse to lead the duet of Sam Cooke’s “A Change is Gonna Come” with Jon Bon Jovi.

The broadcasts of the Kennedy Center Honors and Obama’s pre-inauguration concert afforded tens of millions worldwide the opportunity to experience the artistry of Bettye LaVette for the very first time.

Following the inauguration, Bettye began thinking about what approach to take with her next record. Over the years, she had recorded the Beatles’ “With a Little Help From My Friends” and had included several other Beatles’ songs in her stage show including “Eleanor Rigby,” “Something,” “Fool on the Hill” and “Day Tripper.” For a brief moment, Bettye considered the possibility of recording an album of Beatles’ covers. Picking up on the critical acclaim and sustained reaction to her version of “Love, Reign O’er Me,” the initial concept morphed into the present album consisting of Bettye’s reinterpretation of British rock classics from the late 1960s and early 1970s with Michael Stevens and Rob Mathes on board as co-producers. The resulting album dramatically recasts twelve songs written and originally recorded by Rock and Roll Hall of Fame artists such as the Beatles, the Rolling Stones, Led Zeppelin, Pink Floyd, Traffic and Elton John. As a bonus, the previously unheard, complete and unedited version of “Love, Reign O’er Me” from the Kennedy Center concludes the album.

Some people might be surprised that a black R&B artist would be comfortable and/or interested in recording classics from the sixties and seventies rock canon.

“They are very easy for me to hear,” explains Bettye. “It was sort of like Doris Day songs. They’re so different from the way I sound that it made them interesting to me.”

Part of the issue in deciding which songs to record involved Bettye finding a way of getting her head around the lyric sensibility of British rock writers of that era.

“I think the most difficult thing about putting the album together was that many of the words didn’t make sense to me,” exclaims Bettye. “These songs belong to white fans who are now in their fifties. Many of them I had never heard before. They were not played on black radio. The biggest hang-up was that I didn’t want to disrespect them because I knew that there are people who have altars built to many of these songs. I didn’t want to disillusion anyone who does not realize that they are indeed just songs. That’s the way I feel about them, but I didn’t want to dismiss them. When I got into them I realized that there were things worth saying but I had to make them things that I could sing about.”

To that end, Bettye made substantial changes to the lyrics on a number of songs. For example, on “Salt of the Earth” she changed “strange beauty shows” to “reality shows” and “polio” to “HIV.” On Pink Floyd’s “Wish You Were Here” she decided that it made more sense to start the song with the last verse and then, after a short musical interlude, to sing the lyric from the start as originally written.

Bettye has always gotten deeply involved in anything she sings. Consequently, the key for this album was for her to be able to inhabit these songs and make them her own. To do so, she needed to personalize each lyric. “Wish You Were Here” provides a good example. Once it was explained to her that the song was written about Syd Barrett, the former leader of Pink Floyd who had passed away not too long before the sessions for this album, Bettye decided that she would sing the lyric thinking about her late friends Marvin Gaye, David Ruffin and Eddie Kendricks. She personalized Paul McCartney’s “Maybe I’m Amazed” by thinking about the difference her husband, Kevin Kiley, has made in her life. Similarly, thoughts of her relationship with her daughter informed her version of the Moody Blues’ “Nights in White Satin.”

In finding twelve songs that she felt comfortable recording, Bettye listened to literally hundreds of possibilities. Besides having to feel that the lyrics could be made to work for her, she needed to be able to feel that she could do something different with the song. For LaVette, the process is always immediate and intuitive.

“There is no process of ‘how can I make this different’,” Bettye asserts, “I hear it immediately differently. It’s very hard for another singer to satisfy me. No matter where a singer went with the vocal, if I can think of somewhere else to go, then wherever they went no longer interests me.”

The sessions themselves presented Bettye with some challenges. A headstrong, confident and willful performer, this was the first time in thirty years that she had worked with an arranger. At the outset, she had some trepidation. “I knew I wasn’t going to step into someone else’s arrangement,” she laughs. “Maybe I couldn’t write it down but Rob Mathes was gonna have to do the best he could with figuring out what I was talking about and he did a brilliant job. He understood every word I said. He never once looked at me with a question mark on his face.”

The resulting arrangements provide a rich canvas for Bettye to find emotional creases and crevices in these songs that have been heretofore unexplored. For example, Bettye turned the Beatles’ “The Word” into a stomping funk workout that, in many respects, bears only a tangential relationship to the original recording on Rubber Soul. She opens the song with the verse instead of the chorus. When she does get to the chorus, she deploys two simultaneous parts, rhythmically chanting “say it” while the background singers declaim a facsimile of what the Beatles’ originally sang. After a-minute-and-a-half, she dispenses, for all intents and purposes, with what the Beatles had written, spending the final two minutes of the track funkifying her way through a kaleidoscope of sections involving James Brown-like rhythmic declamations of vocals, various permutations of the chorus, a complete and sudden break and instrumental vamps. The result is a stunning revisioning of a recording that most of us have had burned into our brains for forty-four years.

To be able to realize such dramatic transformations of the original versions of these songs Bettye told the musicians: “I know you know how these songs go but you have to resist the temptation to play them the way they originally went. You have to play them the way I’m singing them and I’m not singing them like the original recordings. You have to suspend everything except the actual notes. Just let everything else go, use the notes and follow me.”

Those instructions are the mark of a superior interpreter.

Listening to the fifty-seven minutes that constitutes Interpretations: The British Rock Songbook is emotionally exhausting. LaVette’s near mystical ability to get inside a song’s lyric, melodic line and harmonic implications, in the process invariably making anything she covers her own, is a blessing that we are all lucky enough to share in. Her ability to make people hear the canon of British classic rock with fresh ears, as if for the first time, will be a revelation for many.

If there is any justice in this world, this should be the album that catapults Ms. Bettye LaVette, song interpreter extraordinaire, into mainstream success. Lord knows, there is no one who deserves it more.