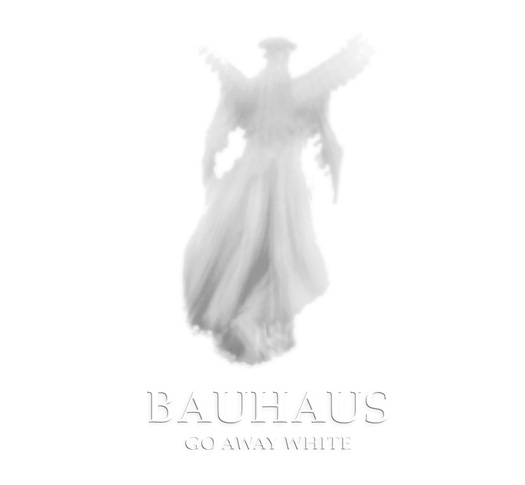 “I come with this darkness and go away white.”

Bauhaus slid fully formed from punk rock’s womb in late 1978. Over the course of four hot years, the unintentionally birthed a genre (Goth), moved on, moved forward and surged mercurial through the post-punk music scene, tearing into tense, stark, dub-bass driven new-wave, T-Rex-esque glam, and swirling, clattering, orchestral atmospherics, whilst churning it all into a grand velvet, Rimbaudian hallucination. It was a wild, inspired, enthralling sound. And it still is. Now there is a new record.

“Go Away White” was recorded in 18 days at Zircon Skye in Ojai, with singer Peter Murphy, bassist Daniel J, guitarist Daniel Ash and drummer Kevin Haskins playing together as a band in one room, taking first takes as final cuts. So, a new record but apparently a final one, the band having decided to release it as a posthumous swan song.

Go Away White is everything you would hope Bauhaus would deliver as their final statement. Fronted by a cover photo of Bethesda, the angel of the healing waters in New York’s Central Park, the music inside is pure-cathartic renovation, a psychedelic glimpse into an enchanted moment. Aided in part by guitarist Daniel Ash’s inspired use of Jimi Hendirx’s own personal Vox wah wah pedal, gifted to him by Peter Murphy at the star of the sessions, it is pop as much as it is experimental.

The 10 songs on Go Away White channel the kind of magic timelessness you could imagine on a mighty bill with Joy Division, Bowie, Devo, The Creatures, Antony, My Bloody Valentine and Kraftwerk – with Oscar Wilde playing master of ceremonies.

As the NME once stated, “Bauhaus are to Goth, what Radiohead are to Prog.”

It’s all building blocks. Go Away White an honest minute and you’ll realize that The Klaxons, The Killers, The Rapture and Foals all got their beats from Bauhaus, and how – without them – there would be no Nine Inch Nails or Jane’s Addiction or Bloc Party, Franz Ferdinand, AFI, TV On The Radio, Interpol, Hot Hot Heat or LCD Sound System.

The accomplishments of the band are too many to list here, but to touch lightly, there are the four studio albums: In The Flat Field (1980), Mask (1981), The Sky’s Gone Out (1982) and Burning From The Inside Out (1983). There is the riveting appearance with David Bowie in the movie The Hunger. There are the classic Peel sessions and the hits – seismic rumbles such as She’s In Parties, Kick In The Eye, Stigmata Martyr, and the great, epic, pillar of ether and brooding, psychedelia, that is Bela Lugoisi’s Dead.

So, an end but an end with one final sonorous statement. Behold Go Away White.

Watch as night comes, as day breaks and the light … pours … in.