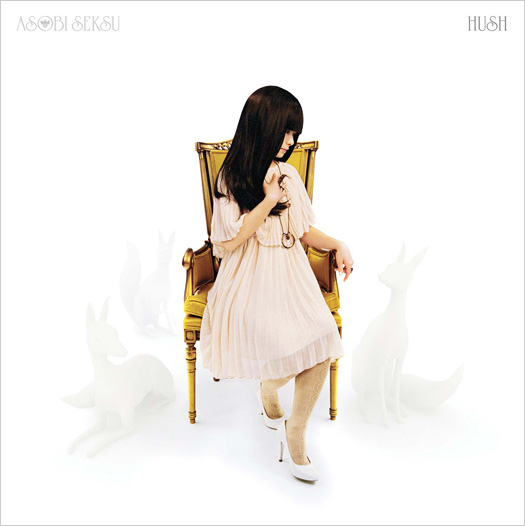 ‘The perfect ratio of sweet vocal to abrasive rock’ – The Guardian

Contrary to the narcotic nature of James Hanna (guitars/vocals) and Yuki Chikudate’s (lead vocals/keyboards) music, the duo avoid chemicals during the song writing process. One exception to this rule: a mind-expanding mushroom experience in Martha’s Vineyard earlier this year.

« It was gorgeous—breezy with nothing but pink skies, » recalls Yuki. Throughout the day a stirring melody meandered its way in and out of James’ head, until he was finally able to store it away for good. This dew-draped motif weaves its way through ‘Blind Little Rain’ until a minute of silence kicks in, effectively drawingHush—the group’s third LP—to a close amid clusters of ambient Eno effects.

If that’s the end of the current chapter in Asobi Seksu’s story, we might as well start at the beginning and fill in all the gaps. While the band’s creative core explored music at an early age (Yuki was playing child prodigy recitals at 8; Hanna bounced between sludgy hardcore and Mogwai-schooled post-rock in his teens), their potential ‘career’ wasn’t put into perspective until a stint at the Manhattan School of Music. And by put into perspective, we mean finding out what they didn’t want to do.

« It was good to have something musical to do all day, since most of my bands were like, ‘Yeah, maybe we’ll practice on Saturday or something,' » explains Hanna, a classically trained guitarist. « Playing someone else’s music all the time seemed robotic after a while, though. »

« It was a miracle I graduated at all, » adds Yuki. « I love playing the piano, but three hours of it—breaking it down, measure by measure, note by note—makes my mind go numb. »

Soon after graduation, Hanna started tackling starry-eyed pop tunes for the first time, with Yuki falling into the front woman position. The problem was trying to be an actual band, as in a fully functioning quartet that tours and records together. Asobi Seksu 1.0 lasted between 2004’s self-titled learn-as-we-go-along debut and the spring of 2005. Hanna and Yuki gave it a go with another bassist and drummer for their critically acclaimed breakthrough, 2006’s Citrus LP, but it didn’t take long to realize that line-up was doomed as well.

Which leads us to the frustration that fuelled the making of Hush. As Hanna admits, Asobi Seksu « was starting to get somewhere » post-Citrus, but they couldn’t ride a cresting wave of hype after a debilitating cycle of touring and personnel changes.

« Hush was written while we felt destroyed, » explains Hanna, quite simply. Which is funny, because the entire record has a phoenix rising vibe to it—a clear sense of shimmering chords and spiral staircase melodies that are occasionally blurred by bits of guitar violence and sputtering drums (see the firework finale climax of ‘Me and Mary’ and the liftoff portions of ‘Sing Tomorrow’s Praise’ and ‘Glacially’).

Another thing Asobi Seksu’s avoided is sheer shoe gaze-pop revivalism. While they’ll admit to an affinity for that realm of into-the-ether music, Hanna and Yuki are too obsessed with the possibilities of sound to explore one well-trodden path.

« Every shoe gaze song is the same rhythmically, » says Hanna, explaining that he’d be terribly bored if he followed that template.

« Their parts don’t propel into other parts, » adds Yuki. « Us, we meander a little more, so it’s not just one big wall of noise. »

Wall of noise? Opening track ‘Layers’, for one, is downright gorgeous, suggesting an afternoon spent in a gently shaken snow globe. That’s what happens when you learn how to use space and dynamics to your advantage, skirting what some might refer to as « Kevin Shields syndrome. »

« I’ve realized that while something might sound awesome in my head, » explains Hanna, « Adding 50 layers to it might make it sound like shit because you lose a lot of the details. Some parts have only one guitar this time. »

He pauses and adds with a smile, « We agonized over that guitar, though. »