A HISTORY OF NOW 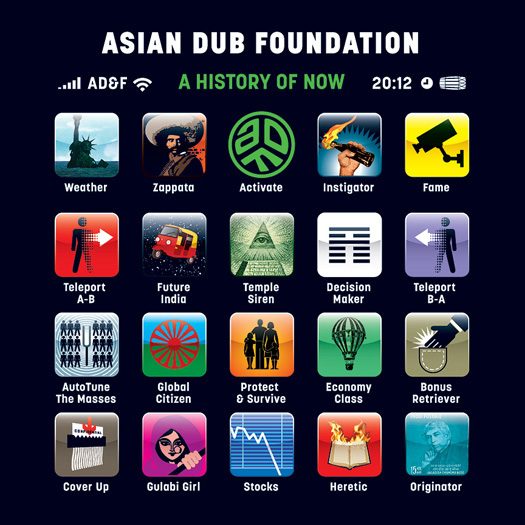 Combining dancehall, dub beats, ragga and punk rock influences with hard hitting lyrics, the multicultural Asian Dub Foundation are back for 2011. Their new studio album again pushes the boundaries and asks questions while being different musically from previous releases. With the sound more expanded, it proves to be the bands most cohesive uplifting masterpiece of their career.

Released February 7th on Cooking Vinyl, the album title is a comment of the present state of humanity on the planet and the world we live in « there is no history anymore everything is in complete flux! »
ADF is proud of what they have achieved, Steve Chandra Savale comments « in the 16 years of the band we have lived through a lot of change, how we make music, how we relate to people, we’re completely transformed and this is a good way to mark that artistically. »

ADF want to get out and play the new songs, they haven’t done extensive touring for 2 years and « its part of our life blood ». The band start this process with a special show at the London’s ULU on February 3rd. Tickets availbale now at http://www.kililive.com/2010/12/asian-dub-foundation/ £14.00 plus booking fee.

« A History of Now » ADF’s 9th studio album was recorded at Brendan Lynch’s « Lynchmob Studio » (Primal Scream/Paul Weller producer). While the album was engineered by Max Hayes and produced by the band’s Sanjay Tailor and Steve Chandra Savale. The video for the title track has been produced by Jim Cauty.

The band are giving away the title track « The History Of Now » from the album as a free download now on their site, www.asiandubfoundation.com .

The 11 songs on the album mark a distinct change and this comes from having live drums, using more strings/flutes which makes for a more expanded sound.
A « HIstory of Now » is not focused on their original mc style, « this sound dates very quickly » explains Aktar Ahmed, this in turn meant he discovered he possessed a superb low voice and this shines through. Other vocalist Al Rumjen’s voice was based on Jamacian mcing but his style sound has also moved on.

This all comes from them « wanting to play to our strengths, to not try and chase other things ». ADF are good at making hybrid music which has « elements of dub/club sensability but also a little bit of guitar based song writing. » Apart from their traditional Indian and Asian influences there are also a lot of none 1st world influences on here.

« It shows on the album that everyones different, we get together, create something that becomes right, we all come from different backgrounds/music backgrounds. We have an ability to gel as one and over the years this becomes more diverse. Individuals become more individual, through travelling – meeting new people/hearing new music, opens your mind and you start accepting a lot more »

A History of Now’s artwork is an intergral part of this with the sleeve representing a super Ultra Phone. The phone is not just for communicating or for music but the apps alter reality and the fabric of the world. The apps include « Autotune The Masses » – getting the masses to sing your song, « Gulabi Girl » – a movement in india of women fighting for women who have been mistreated by men and « Bonus Retriever » – an giant hand motioned by the app to dig in and retrieve.