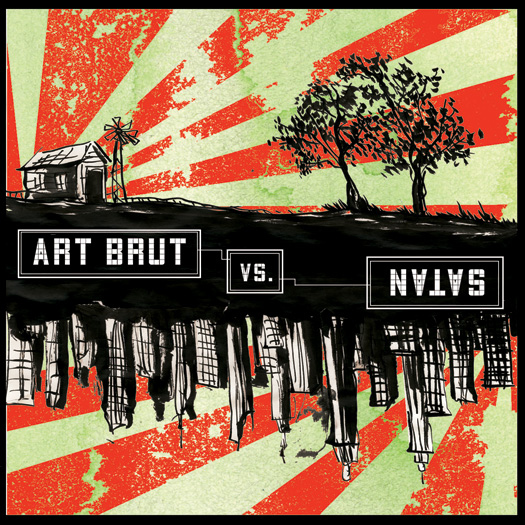 “If we can’t change the world/ Let’s at least get the charts right!”
Art Brut ‘Demons Out!’

Does British pop deserve Eddie Argos? A chart fixture in France, iconic in Germany (where his lyrics have been the subject of a lecture at Berlin University under the tile ‘The Depressive Dandy’), lionised by the cream of alt.America (Craig Finn and Jeffrey Lewis are fans) and a world class blogger to boot (check out:www.the-eddie-argos-resouce.blogspot.com) he is, as the NME pointed out in 2005, ’the new Jarvis’ and so much more.

“It’s strange,” muses Eddie. “Outside the U.K people seem to find it easier to accept our songs on face value. We played in Brazil with Franz Ferdinand and all these school kids were singing ‘Emily Kane’ to me. It really freaked me out.”

Eddie may be an outsider worthy of Albert Camus, but his time is about to come. Produced by Frank Black over twelve days last December, new album Art Brut vs. Satan is the record Brut-o-philes have been waiting for since debut single ‘Formed A Band’ illuminated the musical universe back in 2004. Tuneful, truculent and more on the button than University Challenge’s Gail Trimble, it’s the sound of Art Brut at their most confident and confrontational.

Eddie: “In the past I’ve been worried about what people might think about our records, but this time I don’t care. I know it’s good.”

So how, as David Byrne might ask, did they get here? At the start of 2008, Art Brut found themselves on the other side of the world, touring Australia in support of second album ‘It’s a Bit Complicated’.

Eddie: “We were away on tour for two years. By the end it became a nightmare. Consequently, the second album was full of songs about relationships. I’d been engaged to someone, so every night I’d be singing miserable songs about breaking up with girls. We needed a break.”

When it arrived, it came from an unlikely source: in March, the band severed their relationship with EMI. Infuriated by the label’s decision to release ‘Pump Up The Volume’ without their permission, Eddie wrote the word ‘SLAVE’ on his face. Guitarist Jasper Future began posting anti-EMI blogs. In a stand-off of this magnitude, there would only be one winner.

“They said ‘we’ll let you go as long as you stop slagging us off’,” laughs Eddie. “It was us being a bit cocky and rude, but that works for us.”

Where others might have buckled, Art Brut found themselves gaining (super) power from the spat; a creative Kryptonite which fuels ‘Art Brut vs Satan’.

/cont’d …
Eddie: “We’ve been lucky, we got signed to Rough Trade on our first demo, and then we signed to Fierce Panda, which is a great label. But having that bit of friction really helped us. This album is quite feisty and argumentative, and I really like that.”

Having endured a lengthy recording process for debut ‘Bang Bang Rock’n’Roll’ and ‘It’s a Bit Complicated’, the band resolved to record their next album as speedily as possible.

“I love the first Frank Black And The Catholics album,” explains Eddie. “He did that in one day. It made me think-that’s how I want to records to be made. So we came to the conclusion, let’s ask Frank Black to produce it, and do it like that”

To the band’s surprise, Black –a fervent fan- said yes. Accordingly, the band found themselves packing their bags and heading for Wavelength Studios in Oregon last December.

Eddie: “The studio Frank uses is in Salem. It’s in the middle of nowhere. We were staying by the motorway, and he’d pick us up in his car every day. We’d do eight hour days then back to the hotel. We did the whole thing in twelve days. It was very simple.”

With the band set up in one big room, their amps in the kitchen and Eddie singing his vocals in a cupboard (“It was ok, I had drinks in there”) they set about exorcising the demons of the previous two years.

“I had an album’s worth of songs written, but once we got there we wrote four or five new ones. It all just flooded out.”

Opening with first single ‘Alcoholics Unanimous’ – which finds Eddie bawling “There’s so many people I might have upset/I apologised to them all with the same group text”, Satan spills over with wit, wisdom, and righteous fury. From ‘Passengers’ – a neat inversion of Iggy Pop’s ode to isolation – to the deeply personal ‘DC Comics And Chocolate Milk’ (“From delivering post to serving beer/I’ve never had much of a career”), it’s a rummage through the diaries of British pop’s sharpest observationist.
The pivotal ‘Demons Out!’, meanwhile, cast Argos as an indie Witchfinder General on the trail of those who would corrupt music to their own ends, complete with the lyric: “This is Art Brut versus Satan/The record buying public, we hate them!”

Eddie: “It was inspired by seeing Muse. My girlfriend is in The Blood Arm, who were supporting, and so I was compelled to see them. It was horrible-all these visuals of Tiananmen Square and the Vietnam War. They’re from Devon- what have they got to do with that?”

‘Slap Dash for No Cash’ meanwhile, is an ode to immediacy which poses the question: “Why is everyone trying to sound like U2?/ Why would you want to?”.

Eddie: “I can’t stand the fact that every band seems to think it’s ok to use that epic sound. In the current climate people shouldn’t be sounding like that. They should be more austere-it’s just not cool.”

/cont’d …
If ‘Summer Jobs’ –inspired by a stint working at Harry Ramsden’s in Bournemouth- and ‘Twist and Shout’ –about singing Jeffrey Lewis songs in the post office- touch on familiar Brut themes of alienation and social embarrassment, the surprise comes with a final ‘Mysterious Bruises’.

A seven minute excursion into the agit-funk of ’77 era Talking Heads (or, if you prefer, Julian Cope’s ‘Safe Surfer’) complete with the Pullitzer-prize worthy couplet: “I can’t remember anything I’ve done/I fought the floor and the floor won!” it’s a sobering account of the morning after the night before which seems destined to fill dance floors from Paris to Pasadena.

Which is where we came in.

The sharpest, most articulate song-writer in rock is back on our doorstep, ringing on the doorbell. He’s here to make us laugh, cry, and remember why we got hooked on the stuff in the first place.

After all, they’re doing it for you, so you better be grateful. Time to decide whose side you’re on.