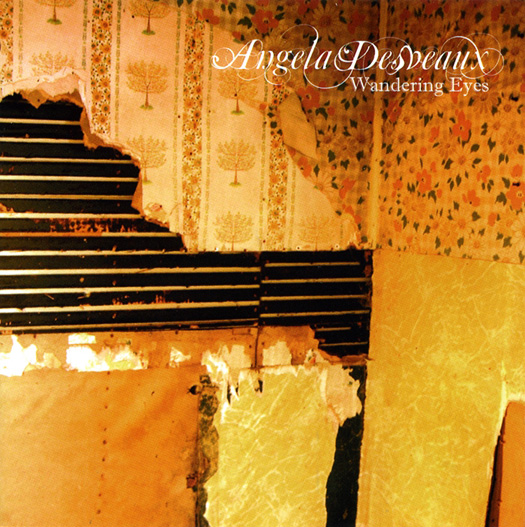 If Angela Desveaux could have three pictures in her wallet, she says they would be of Gillian Welch, Lucinda Williams, and her grandmother. These are the figures she holds dear and suggest the influences that have shaped her musical identity. Wandering Eyes is a sparkling country debut that highlights both Desveaux’s brilliant voice and her poignant song writing, inspired by those heroes with an alt.country twist.

Angela Desveaux was born in a suburb on the south shore of Montreal, but spent her early years in Cape Breton, Nova Scotia, the home of her family and her musical heritage. “All the residents of Cape Breton are music lovers and players,” says Desveaux, ”and that’s what I inherited from them.” Cape Breton is a small fishing town of French descent, surrounded by mountains and sea, and known for its unique style of music developed from traditional Irish and Scottish folk and fiddle sounds. “The fiddle music there has a specific style and it’s very nostalgic,” says Desveaux. “You look out a window and you see the Atlantic Ocean and hear that fiddle music playing in the background, and there you have the closing credits to your life.”

Her own music hints at a similar air of nostalgia, with lyrical twists and a jaded edge that are straight-up country. “My parents listened to more country music than residents of Nashville,” she says. “From the old classics — Lefty Frizzell, Hank Williams, Roger Miller, George Jones, Dolly Parton, Loretta Lynn — to the modern cheese. But I prefer the former.” More than just shaping what she listened to, Desveaux’s family was also where she began playing music. “There were always those drunken-folk jamboree sing-a-longs at my parents’ place. Dad and my older brother Darrell played guitar, my uncle the piano and Mom sang. Then she would bring the party down a notch when she would beg me to sing all my favourite country ballads. My dad and my mom pushed me a lot to keep singing – I think she always wanted to be a singer herself.”

The Desveaux family returned to Montreal when Angela was ten. There Darrell joined a rock band and Angela found a new kind of musical inspiration. “I didn’t realize what the Desveauxs could do until I saw my brother wearing a mask with a long mod haircut, jumping off amps and screaming into a mic in front of my high school. I sang back-ups in his band, then started to play and sing with other girls like me.”

“I rebelled against my country roots for a while, ‘til I discovered the Flying Burrito Brothers, The Byrds, Gram Parsons and Son Volt, and they made everything all right again,” she says. ”In this little local bar in Montreal called Barfly, they had a bluegrass open-mic on Sunday nights. I started singing there and met a lot of musicians and singers that I still work with today. We have a great close community of musicians and recording studios in Montreal, and there is a lot of project- and band-swapping going on.”

By the late ’90s, the now-28 year old Desveaux was singing backup and playing guitar with a number of Montreal bands. She gained attention as a member of a country group, the Sonny Best Band, and kept up with her bluegrass and song writing on the side. “I felt very comfortable in the bluegrass environment – when I hear and play that kind of music, it always feels like I’m going home,” Desveaux says.

She slipped a demo of some of her songs to Howard Bilerman, recording engineer, owner of Hotel2Tango Studio and former drummer of the Arcade Fire. He was so impressed that he not only offered to record her, but offered to play drums for her as well. Desveaux also says that Bilerman has since helped guide her, “to keep me going and focused. Through recording songs with Howard, I met a lot of musicians who played rock music who were interested in playing with me. My older recordings were very acoustic, but for this record, I wanted to hear my songs played with a rock band.” Desveaux asked Brian Paulson (Slint, Superchunk, Wilco, Archers of Loaf) to record the album, “so I could push it in this direction as much as possible.”

On Wandering Eyes, Angela Desveaux takes the influences of her youth and blends them seamlessly into her well-crafted pop songs with her voice as the centerpiece. “I feel strong in my songs,” she says, and the result is a remarkably self-assured debut. Angela will tour North America for the first time with her band this fall.