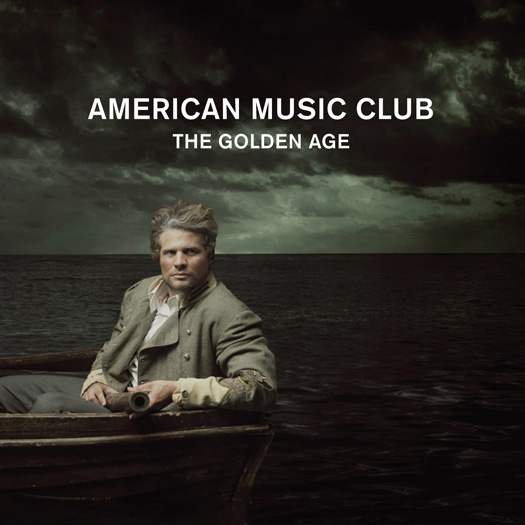 “I don’t intend to make songs dark or difficult. I want to make the best f*cked up pop songs out there.”

So says Mark Eitzel, lead singer and songwriter of the legendary American Music Club, who will be releasing their 9th studio album, The Golden Age, on Monday 4th February 2008.

Featuring 13 songs, The Golden Age exudes an understated brilliance, and sees AMC moving away from the fragmented studio sound of their last, critically acclaimed opus Love Songs For Patriots, to an altogether lighter more cohesive sound reminiscent of their earlier works, whilst the backing vocals and melodies recall LA in the early 70s where folk / pop / rock of CSNY, Fleetwood Mac, Bread and the Hollies ruled. Eitzel states this was all done intentionally as

1) AMC refutes the label of ‘Emo Pioneers’. For the record AMC hate Emo and have never been on the soundtrack for any Warner Brothers network show … yet.
2) Dark music is for people who are healthy enough to take it – and AMC want to appeal to all people – including the sick.

Cited as “America’s greatest living lyricist” (The Guardian), Eitzel is on top of his game once again. From the beautiful simplicity in “All My Love”, the pure twisted pop of “Who You Are”, to “Windows of the World” an ode to the World Trade Centre, and the mariachi waltz of “That’s Not Really You”, The Golden Age is yet another triumphant return to form.

The Golden Age was recorded at King Size Studios in LA, home of producer/mixer Dave Trumfio (Wilco, Grandaddy, My Morning Jacket). Eitzel was joined by mainstay and lead guitarist, Vudi, keyboardist Jason Borger, plus a new rhythm section, bassist Sean Hoffman and drummer Steve Didelot, both formerly of The Larks. Eitzel had been unhappy with the recording of the last album as Vudi had little involvement and the only way to work with Vudi was to move to LA. Former drummer Tim Mooney who played on the bands last three albums and long term bassist Danny Pearson remained in San Francisco working on their own respective projects.

Formed in 1982, American Music Club produced music that reflected America, blending post punk, country and folk with Eitzel’s down beat poetics. The line up changed a year later with the arrival of Vudi (guitar) and Danny Pearson (bass) to form the core group which lasted up until 1995. Within this period the band released “California”, “United Kingdom”, “Everclear” and “Mercury”, all considered masterpieces of modern American rock, cementing their place in history as one of the most dynamic, intense and intelligent acts. AMC had signed to a major for the release of “Mercury” and after non-stop touring in ’94, the group put out their seventh release titled « San Francisco”. This was to be their last album as Eitzel decided to dissolve the band and purse a solo carrer which spanned eight albums. With the likes of Radiohead, REM, Pearl Jam, Coldplay and a host of others proclaiming their love publicly for AMC, the bands status grew and in 2004 they returned for a sold out performance at the South Bank Centre in London.