The Sky Is Mine 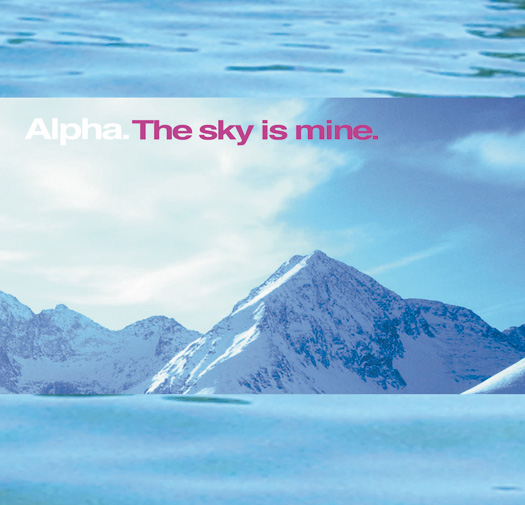 This is Alpha‘s eighth album (including last year’s compilation of collaborations and remixes, ‘Without Some Help’) but is their first ‘vocal’ album since 2003’s ‘Stargazing’ and is released on their own inprint Don’t Touch Recordings.

Whereas previous albums featured a number of vocal collaborations, this time it is only long-term member Wendy Stubbs singing on The Sky Is Mine. And just as their debut ‘Come From Heaven’ (released on Massive Attack’s Melankolic label) was widely acknowledged as a classic collection of trembling torch songs, so this album develops that strand dramatically further. Whilst still deploying their skills for gentle experimentation, Alpha have tunnelled their sound out to a bolder, brassier landscape with Wendy often belting out her melancholic choruses like one of her heroes, Shirley Bassey.

When Wendy first started working with Alpha they already had a lot of musical influences in common such as Scott Walker, Michel Legrand and Burt Bacharach. They also shared a love of simple love songs, mixing and merging different genres with bittersweet melodies thrown around by giddy synths and melodramatic strings.

Over the years Alpha have worked with many varied artists (Jarvis, Acid Casuals, Blueneck, Coldplay to name a few) and are known for their inventive and emotional production. Last year Corin Dingley mixed the James Roberts album (a NME 9/10 on release) and more recently finished work on the superb debut lp by The Heavy who were promptly signed to NinjaTune and whose album is released in the Autumn.

« Alpha are a Bristol outfit responsible for two of the most remarkable songs of the 90s in ‘Wise’ and ‘Sometime Later’, better than anything Portishead, Tricky or Massive Attack ever released track them down right now, they’re pure molten beauty »

My Name Is Nobody