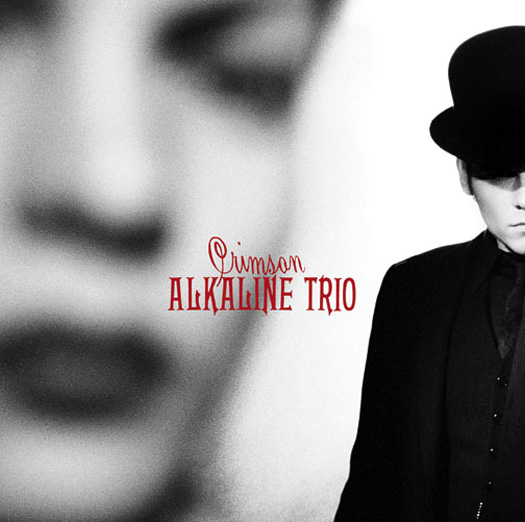 Though the current world of Alkaline Trio is not nearly as fraught with and fueled by drink and drama as in the band’s formative years, the making of the new Crimson (out May 23 on Vagrant), was not without its share of dark portents: Two bone-shattering skateboarding accidents, one PunkVoter tour that failed to block the reelection of George W. Bush… but oddly enough: No failed relationships! With marital bliss on the horizon for guitarist/vocalist Matt Skiba and drummer Derek Grant, and having already claimed bassist/vocalist Dan Andriano, the Trio was forced to dig deeper for inspiration than their latest and greatest benders and which ex-girlfriend(s) may or may not have burned down their last house(s)…

As a result Crimson stands as the most mature and ambitious 13 songs Alkaline Trio has ever pushed itself to create-with able guidance from producer Jerry Finn (Green Day, Blink-182, Jawbreaker). From the ominous piano and atmospherics opening of first single « Time To Waste » to closing ballad « Smoke, » not a moment or note is wasted as the familiar Trio balance of darkness and melody on « Mercy Me, » « Dethbed » and « The Poison » nestles up against increasingly progressive tempos and arrangements of « Burn » and « Satin, » and the epic true-to-life tales of Manson family member Sadie Mae Glutz (« Sadie ») and the West Memphis Three (« Prevent This Tragedy »).

Alkaline Trio’s legacy harkens back to 1997, when Matt Skiba, a bike messenger from working class Chicago ‘burb McHenry, gave up the drums for the guitar and began his quest for the perfect balance of lyrical hell and pop heaven. He and fellow messenger/drummer Glenn Porter and bassist Rob Doran would debut as Alkaline Trio on the For Your Lungs Only EP. Dan Andriano replaced Doran prior to the Sundials EP, adding a second voice and songwriting style that complemented and contrasted with Skiba’s, and the signature Alkaline Trio sound was born.

From Here To Infirmary was released in 2001, marking both the Trio’s Vagrant Records debut and the addition of ex-Smoking Popes drummer Mike Felumlee to the fold.  Singles « Private Eye » and « Stupid Kid » and staples « Crawl » and « Another Innocent Girl » became instant classics to the exponentially growing Alkaline Trio fan base that buoyed the record into the top 200 and packed clubs and theaters, transforming the band into a formidable worldwide draw.

The current Alkaline Trio line-up finally solidified with 2003’s Good Mourning, as former Suicide Machines drummer Derek Grant came aboard for the perfection of the Trio sonic identity that had been evolving since ’97. On the strength of anti-mainstream anthem « We’ve Had Enough, » the cloyingly bittersweet « All On Black, » a yearning « 100 Stories » and cautionary love and death serials « Emma » and « This Could Be Love, » Good Mourning crashed into the Top 40, saw the band’s debuts on Late Night with Conan O’Brien and The Late Show With David Letterman, and received raves from Rolling Stone, SPIN, Entertainment Weeklyand the cover of Alternative Press.

Crimson delivers on this promise in spades. As « Time To Waste » builds from mounting menace to a majestic and traumatic chorus and segues directly into « The Poison, » an Andriano barnburner reminiscent in spirit of those I Lied My Face Off era sides, though played with a fierce precision to which the early Trio could only aspire. « Burn » updates Skiba’s songwriting acumen with twists and touches worthy of vintage Sisters of Mercy and Depeche Mode, while « Dethbed, » « Mercy Me » and « Fall Victim » find an ever maturing but still familiar Alkaline Trio sound resurfacing like a long lost friend.

Just as Alkaline Trio were about to start recording Crimson, Matt Skiba fractured his wrist

skateboarding. Though it was a minor break, and he was only in a cast for three weeks, the break pushed back the Trio’s recording schedule and the pending album’s release. After Skiba healed, the band jumped into recording and, with the help of producer Finn, finished in January ’05. Skiba was anxious to get back on his board (though an avid skater since the age of ten, he had abandoned it for three months in fear of injuring himself again and further delaying the album’s May 23rd release). But, after 15 minutes, Skiba dropped into a pool and broke his left arm.

Now finally healed, Skiba is anxious to get Alkaline Trio back on the road. After all, the collective misfortunes that may have hobbled lesser acts have only provided Alkaline Trio with five studio albums worth of increasingly stronger material. As Skiba sings on the new record, « God bless catastrophe… »

Alex Is On Fire