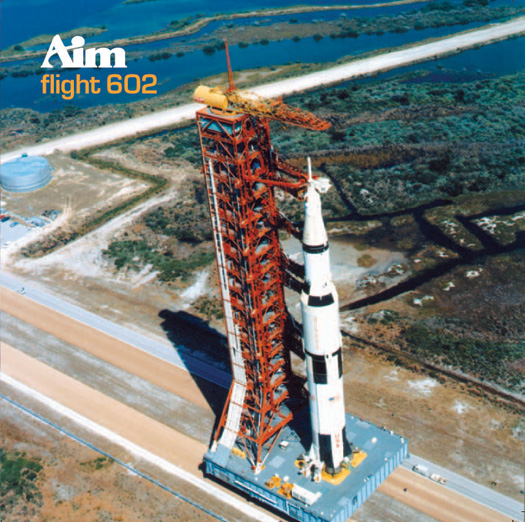 When they said the revolution was coming, we’re sure nobody expected it to spawn from Barrow In Furness. Uniquely for a man whose albums have shifted over 100,000 units each and whose fan base has multiplied with every sample and beat, Andy Turner’s back yard has always been his creative stomping ground. Brand new album Flight 602 again sees us cruise somewhere over the mid-Atlantic, taking in both the cobbles and countryside of the North of England and the skyscrapers of North America in a rich panorama of sound. Like he says, ‘What I do would be completely different if I lived in the city’.

Back in 2000, when Aim’s debut Cold Water Music dropped from the belly of the Grand Central mothership to rapturous arms and ears alike, few could have expected the Aim phenomenon to have been such an unstoppable force. Fast forward six years and Andy ‘Aim’ Turner is a man with his fingers tickling every conceivable switch. His second record, Hinterland, achieved the kind of critical mass cult following that most seldom manage to attain, straddling the impossible void between creative independence and inescapability. To say that Aim has become ubiquitous in any self-respecting record collection would only be looking at the truth from one particular angle.

It’s been four drama-packed years since. Aim – the man and his box of tunes – has mutated into not only a live-action multi-musician hydra, playing packed venues around the world, but a record label from which to platform his own material and the cream of everybody else’s. Thus ATIC was born, a curiously appropriate label name for a bedroom-born empire, and Andy Turner ticked another box off his checklist for global domination.

‘I wanted a name for the label that didn’t mean anything, I wanted it to be evocative but didn’t want it to be clever or something that people could decode so just I made a new word up. It looked pretty good written down and rolled of the tongue nicely so it stuck.’ – Andy

The darling of his fledgling ATIC label, Niko, takes centre stage on Flight 602, the microphone dipped in her caramel vocals on jazz kickback Puget Sound, the eerily dramatic Aberdeen (‘Niko can find melodies I’d never dream of. In certain sections of this track I tried to get her sounding really distant, like in The Blair Witch Project’) and recent single Northwest. There’s so much to choose from here too: from the hectic, urban sprawl of Birchwood to closer It’s Later Than You Think and its elements of folk and psyche perfectly in motion. To think that track came about ‘one afternoon in about an hour, with two friends, an acoustic guitar and a bit of paper’ is quite staggering. Lest we forget Aim’s deceptively jaunty slight at political heavy-handedness Pier 57. Explains Andy, ‘in 2004 the Republican Party held their annual convention in Manhattan, NYC. for the weekend the city was under virtual martial law as the police and military fused and hundreds of peaceful protesters were literally herded up and held in an old abandoned warehouse full of oil and asbestos, some for over 48 hours with absolutely no charge. the warehouse was on New York’s Pier 57.’

We could continue in this vein of soundbites and superlatives for some time. It’s just that Flight 602 one of those records so oversubscribed with potential favourite moments, one you’ll be arguing over with friends late into the night over the various merits of your personal picks, that it’s impossible to easily quantify.

Over the last 6 years Aim has established himself as one of the UK’s leading underground artists releasing the critically acclaimed ‘Cold Water Music’ and ‘Hinterland’ albums as well as remixing a whole host of artists including Ian Brown, St Etienne & The Charlatans.

Having left Grand Central and launched his own Manchester based independent label – ATIC Records – Aim is gearing up for the release of the third album, ‘Flight 602’ which looks set to propel him to further heights when it’s released in September.

Acting as an outlet for Aim’s new material and a launch pad for a host of great new acts, ATIC looks set to become a benchmark label. The label is already turning many heads having released the first ATIC 12″ EP including Aim’s dangerously funky ‘Smile’ which prompted DJ Magazine to declare « the hottest label kick start out of Manchester for a while. »

The new LP ‘Flight 602’ will hit the shelves on 18th September 2006 preceded by the single ‘Puget Sound’. Aim has been working closely with fellow ATIC artist and Aim live vocalist Niko on his new material. He’s bursting to get it out there; « Musically, it’s a a definite progression from anything I’ve done previously. I think it makes my old stuff sound amateurish, » he says, « so I reckon it’ll do alright. »

The Aim 9-piece live band consists of drums, percussion, bass, guitars, keyboards, horns, flute, alto-sax and vocals – it’s one of the funkiest, tightest bands on the circuit – they’ll be out doing a full UK tour around release of ‘Flight 602’ and are looking forward to doing the summer festivals. « I just can’t wait » says Aim.