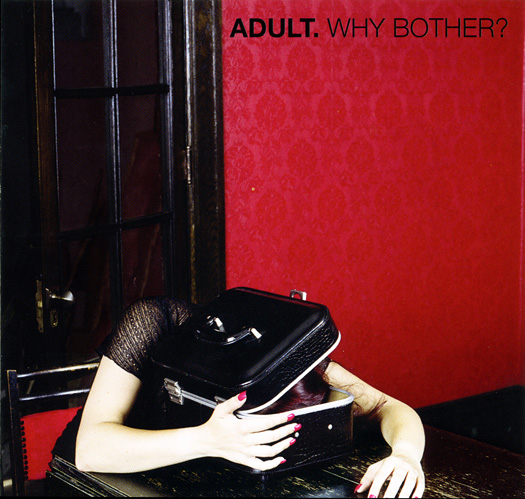 ADULT.’s latest album is called « Gimmie Trouble » and it was released October 11th, 2005 on Thrill Jockey.

Why the name ADULT.?
It was a reaction to the way MTV culture makes anything young « cool » – so we thought ADULT. would be the most un-cool name we could think of, because it was the opposite of YOUTH.

Why the period (full stop) at the end of ADULT.?
Let us first say that the (.) is silent when spoken.
Andy Warhol once said, « If you want to know all about Andy Warhol, just look at the surface of my paintings and films and me, and there I am. There’s nothing behind it. » Another artist, Frank Stella, said about his paintings in the sixties « What you see is what you get. »We somehow feel that the (.) at the end of ADULT. encompasses this idea. It somehow says ADULT. « What you see is what you get. » 2 people from Detroit trying hard to make interesting music. Everything about ADULT. is created by us, our songs, our artwork, our live shows, etc. There is no big corporate machine behind us telling us what to do. Mike Watt from The Minutemen said it best, « I just hope that maybe some people will read about us and see how we weren’t manufactured, that we were just three dudes from Pedro and that maybe they could do the same thing themselves. »

When and why did you start working together?
We started writing music together in 1997. We wanted to start a band that people would have extreme reactions of either love or hate to. We felt that techno, house, etc. had become mainstream. Every TV commercial and even the BBC news uses electronica. We felt that most indie rock was based either too much in hard rock or folk we we started ADULT. for our tastes as well. We wanted to make something with passion that made people listen because it was different, even if they didn’t like it. For a brief period of time, we were a 3 piece. Samuel Consiglio joined the band in mid 2005. We were about to tour for the D.U.M.E. ep and needed a third set of hands to preform the new songs live. Once the 3 of us started working together, an energy developed and we quickly started writing new material together. This material ended up as two-thirds of the 2005 album « Gimmie Trouble ». In January 2006, between the North American and European tour, Samuel’s involvement in the band stopped.

What about Detroit?
Most people think of it as some amazing Mecca, then of course they come here and they are totally amazed that is nothing like they imagined it. We love DETROIT, but it isn’t for everyone. It is rough with very few conveniences. It’s certainly a love/hate relationship living here at times, but this is where we feel comfortable. We can live cheap, which allows us to not make any sacrifices in our « art ». The decisions we make are not money driven. We think this makes it easier to focus on what’s important, instead of being constantly side tracked. Detroit is like a small town in many ways, but a small town with a vibrant music scene.

Grammatical Tips for the name ADULT.

1: Even though the period is part of the band’s name, it is silent when spoken.
2: ADULT. is always spelled with a period at the end, and is generally always in all capital letters, even in the middle of a sentence. For example: I think the band ADULT. suck.

3: When ADULT. falls at the end of a sentence, there is to be only one period, never two. For example: I hate ADULT.

4: A comma simply follows the period. For example: When I listen to ADULT., I get a headache.

5: When ADULT. is possessive, it should appear with the period before the apostrophe. For example: I hate ADULT.’s new album.