MUSIC SOUNDS BETTER WITH YOU 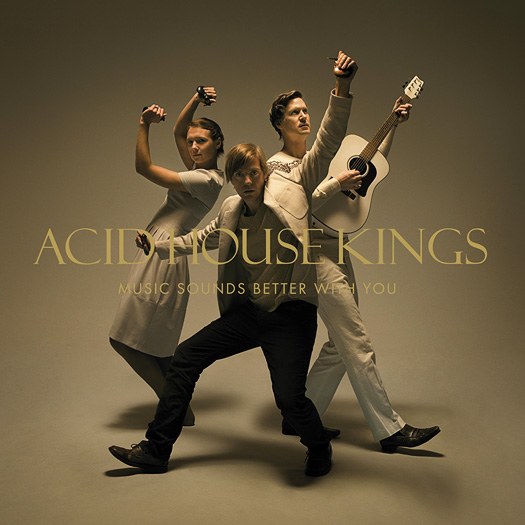 Yes, Sweden’s pop perfectionists no. 1 are back. Finally!

ALL MUSIC  called the predecessor Sing Along with Acid House Kings”One of the best releases, indie or not, of 2005″.

Now, after half a decade of fine tuning their song writing, fans are in for something extraordinary with Music Sounds Better with You.

A first taste from the album was released on December 7. Are we lovers or are we friends? became an huge success, topping blog charts like Hypem.com andElbo.ws.

SCRAPPED HALF AN ALBUM

– We’ve allowed ourselves to be extremely self-critical. Songs good enough for any of our other albums have been discarded out repeatedly, says Johan Angergård.

Acid House Kings first started the recordings of Music Sounds Better with You in the year 2008, but after three months and with more than half the album finished they decided to scrap it. Reason? They weren’t completely sure they would top their previous album and considered the songs too dark and not melodic enough for The Kings.

From Johan went on to record the much darker The Legends album Over and over while Niklas continued fine tuning his song writing for the Kings. And the old “good songs sound good on an acoustic guitar” holds true. – Most songs never enter the studio, they are scrapped in the living room sofa, says Niklas Angergård.  In the beginning of 2010 Acid House Kings once again had Johan’s full attention and he returned with new inspiration, a brighter mood and numerous new songs early in 2010. According to the band the new album is “sharper, catchier and livelier” and a “goodbye to genre obligations”. It also got castanets on every single song.

-“Music Sounds Better with You” will not re-define pop music, but it may very well define it, states Julia Lannerheim

PRESS (”Are we lovers or are we friends?”)

« Acid House Kings Are Back With Achingly Infectious « Are We Lovers or Are We Friends? » » MOG

« It’s deliciously hummable and – like all the best Christmases – over way too fast. » THE LINE OF BEST FIT

« On to the song, it’s pretty much delightful pop perfection. It’s catchy and sounds summery and pleasant. » PANIC MANUAL

« Are We Lovers or Are We Friends? » is a lushly arranged pop explosion, laced with ’70s soul and oozing sentimentality. »

«  »Are We Lovers, Or Are We Friends? » highlights, they are making sure not to forget the sun-drenched, jangly pop core of their sound that fans have come to know. » CONSEQUENCE OF SOUND